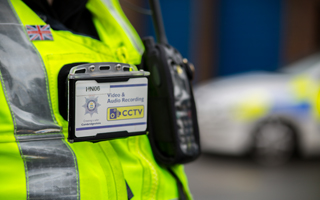 Body-worn video (BWV) is an important piece of kit to help protect police officers - especially those on the frontline and those who carry a Taser or firearm - and as such we want to see a wider roll-out of it by forces.

We want to ensure that the cameras (as pictured right) are made available to all officers who want them and used effectively in the best interests of our members and the public we serve. BWV increases the transparency of policing and any footage recorded can be subsequently reviewed, scrutinised and submitted as evidence, making officers more accountable as well as offenders. In particular, these cameras are a vital piece of kit for firearms and Taser officers given the nature of their work, and the Independent Office for Police Conduct (IOPC) also supports their use.

In a survey of our members on a range of policing issues in 2016, only 18% said they had regular access to BWV, but a further 33% said they would like access. Since then, all forces have rolled out the equipment to their officers, most notably the Metropolitan Police, the largest force in England and Wales. In June 2017, the Met announced their largest roll-out to date, to 900 traffic officers and a further 950 Safer Transport Team officers, with other task force teams and officers in a further ten boroughs to receive them in the coming months.

Work is still ongoing into the difficulties that can arise from the use of BWV, such as the cameras not always being turned on, what happens to the footage in the aftermath of incidents and also an officer's right to refuse to wear a camera. Another issue is access to footage for officers following a death or serious incident after police contact, as it could have a bearing on investigations by the IOPC.

In addition, we are calling for a wider roll-out of other essential pieces of kit including Taser and spit and bite guards.