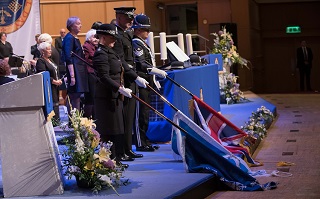 Police Staff Associations representing rank and file officers have joined forces with prison officers to call for the creation of a brand-new award to recognise services of fallen heroes.

The campaign launched by the Police Federation of England and Wales, the Police Superintendents’ Association and the Prison Officers Association have called for unique recognition of emergency service workers who make the ultimate sacrifice in the line of duty. The various associations have called on the Government to create a new posthumously awarded ‘medal’.

The current awards system does not formally recognise emergency service workers who lay down their lives while performing their duties. The associations have appealed for approval from the Home Office and are seeking support across party lines to enhance the current honours and awards system, which fails to adequately reflect the dedication, commitment and sacrifice of those individuals who lost their lives in keeping their local communities safe.

It is envisaged to be similar in status to the Elizabeth Cross, which is awarded to the bereaved relatives of members of the British Armed Forces killed in military action.

Find out more about support for the campaign here.