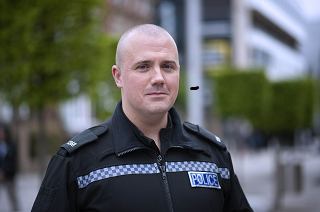 I am a PC on the neighbourhood team at Newcastle and the reason I joined the service was to make a difference. It was a job that I really wanted to do and when I looked at the career, length of service and pension, those were all contributing factors.

I am in a privileged position compared to younger officers, especially if they are in a position I was in when I was their age, because I have been able to accrue some savings, but with a heavy heart we have started to dip into those savings - funds that were set up for university for my children. I have had to use them to pay bills which is something I really didn’t want to do.

The cost-of-living crisis, combined with years of pay cuts, has had an impact on my wellbeing. The plans that we had made for our children, we are having to amend. I am hoping that in a few years things will improve but it’s been a long time now since we have had any sort of improvement, so I am not confident.

As an officer with over 17 years of experience, the erosion of pay is a massive slight on officers. It doesn’t make you feel valued. When I joined, I was told we had an agreement with the Government that we were not allowed to strike, and, as a reward, we would receive decent pay and decent pay rises - but that is no longer the case.

I feel massively undervalued by the Government. I was promised a pension that I am now not going to get, we were promised adequate pay rises that we have not received for a long time. Since I started, I have also had incremental pay rise freezes. I was told it would take 10 years to go onto full pay, but it took me nearly 12 years. It just seems that every element of our pay and conditions has been gradually eroded.

I have been assaulted numerous times whilst on the job with some leaving scars. As you get older, the risks become greater, you are not as physically fit or physically able as some of the people you are going to have to tackle. You also have a lot more to lose. I have two boys and a wife at home who need me. I do not think that what we are paid, represents the risks that we face each day.

It’s been so long since we’ve felt we have been treated fairly. The ability to recruit and retain new officers is also an issue that is impacting morale. We’ve had a lot of officers come through who are not lasting, but when I joined, officers didn’t leave the police force, it was a career for life. Anyone leaving would have been quite big news. The promise of gradually getting on to the full pay and the 30-year pension scheme was the big draw and a big reason to stay for new recruits, but a lot of that is gone. When young officers come on to the job and see what it is really like, I am not surprised a lot of them leave.

Much like my colleagues, my morale has been low for a very long time, and I have stopped expecting anything, any sort of pay reward for what we do. It’s sad to even think about it. It is part of the reason I moved over to the neighbourhood team because the risk and rewards do not balance out when you are out on the front line and going to 999 jobs without adequate back up.

I know a lot of people who have left over pay – the majority going on to be train drivers and other professions we never thought we would lose people to.