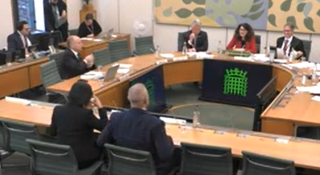 The Committee members asked about many issues within and facing policing currently, including David Carrick, institutional sexism, rape prosecutions, economic crime, police officer retention, supporting other public services, inability to strike, issues regarding an inexperienced police force, and the wellbeing and mental health crisis in policing.

The Chair of the Home Affairs Select Committee Dame Diana Johnson MP (Labour) opened the session noting this has been a “very difficult week for policing” and that the police are in the headlines again for “all the wrong reasons”. She asked about the “systemic failure of the police system” that allowed David Carrick to carry on serving as a police officer. Andy Cooke QPM DL, His Majesty’s Chief Inspector of Constabulary and Fire and Rescue Services, agreed that there have been significant failures, but also highlighted there were “many, many good police officers doing a good job keeping us all safe.”

Mr Cooke referenced the 2021 review of vetting, misogyny and counter corruption carried out by HM’s Inspectorate of Constabulary, Fire and Rescue Services, which resulted in a set of 43 recommendations in relation to addressing issues associated with this. As a result of recent events, he revealed that they would be bringing forward the timelines set for these recommendations to be put in place by police forces.

The Rt Hon Ms Johnson raised the issue of the way police forces behave towards women, both internally, and how they treat women generally as members of the public, she specifically asked Cooke whether he thought the police service was institutionally sexist. Mr Cooke did not agree with that statement and noted that roughly 40% of the police service are female and that 40% of the chief constabulary are female but did agree there were big issues with sexism in the policing system.

James Daly MP (Conservative) raised the issue of poor outcomes for rape and sexual assault cases and assigning blame to police officers for not referring rape allegations to the CPS, arguing that this was down to an attitude of misogyny within the police force, he asked Mr Cooke what his recommendations would be to address this. Mr Cooke noted that he does not believe this is down to misogyny within the police force and outlined what he perceives to be the main issues in policing which have culminated in this problem: a shortage of detectives, an inexperienced workforce and supervision, and the Uplift Programme, which he noted was a good thing, but brought its own challenges.

Simon Fell MP (Conservative) raised the issue of future challenges for policing, highlighting that economic crime was on the rise and asking whether it was a high enough priority for policing. Mr Cooke agreed that economic crime and fraud is not a high enough priority, due to the significant lack of resources and the specialist skills required. He argued that due to low remuneration rates in the police, retention of specialised officers is challenging as they tend to move on into the private sector for “far more money” than they would get from policing.

Paula Barker MP (Conservative) raised her concerns about the lack of years of experience some police officers had, and whether this was impacting on the general public. Mr Cooke said inexperience does have an impact on the service provided to the public, emphasising that the current young and inexperienced workforce requires good supervision, with strong values and standards being implemented by chiefs and commissioners from day one.

Ms Barker then asked whether police officers should have or should be working towards a degree and whether that would have an impact on police services? Mr Cooke explained he does not believe that every police officer needs a degree. Instead, he noted that police officers need high standards, common sense, good values, bravery, and compassion.  He added that having a degree as a prerequisite to joining the police, on occasions could deter applicants, he emphasised the dual route into policing was necessary.

In the second session, Harvi Khatkar, Vice President, Police Superintendents' Association and PFEW National Chair Steve Hartshorn both opened the session with a recognition of recent events. Ms Khatkar said: “As a police officer, to hear whats happened this week is horrific, and it makes me feel sick... I have 29 years service in policing, I feel that we’ve let the victims down, I am really sorry as a service that we have done that. I don’t think there is any police officer who wouldn’t find this abhorrent in terms of what has happened, and we really need to get to the bottom of this and root out any officer that has those kind of views and commits these horrific crimes.”

Mr Hartshorn followed up by saying: “If I may echo the sentiment from Harvi and offer an apology to the victims, and also the wider public for the loss of confidence in policing on behalf of every right thinking, decent police officer who will be appalled by recent events. We are absolutely disgusted by what has happened and certainly within the Police Federation of England and Wales we will be pushing for the changes that are needed to get back the confidence from yourselves and wider public.” The committee acknowledged the apologies and their sincerity.

Tim Loughton MP (Conservative) raised the issue of institutional sexism in the police service, asking whether there was a mindset problem that needed to be addressed by police officers. Mr Hartshorn pointed to the issue of low levels of supervision in the police force in certain areas and he added that there needed to be more development around an environment that allowed people to come forward and make allegations safely, he said: “We encourage our members to stand up and adhere to the police code of conduct. Report it immediately, it’s unequivocal. You need proper effective supervision, so that someone at any point can call out inappropriate behaviour, I don’t think that’s always in place.”

He added: “We talk about culture, and I do think there needs to be cultural change, there needs to be a proper a victim led approach, so when a police officer or anybody comes forward they are treated properly.” He said this is why PFEW are challenging the use of NDAs if the victim is in support. He spoke of shining a light on inappropriate behaviour and considerations being made for the complexity of officers making complaints within a hierarchy. Ms Khatkar spoke of the need to increase “colleagues’ cultural competence” saying, “it is easier for someone who has rank to stand up and have their voice heard.”

Issues with charge rates were raised specifically in regard to rape and both witnesses were keen that an overall review of the criminal justice system as a whole takes place to understand the issues from all parties, as reviewing the problem in a siloed way hasn’t been leading to improvements.

The discussion moved on to figures round whistleblowing. This was described as a complex piece of work to understand across forces, as the data must be interpreted correctly. Mr Hartshorn explained that low statistics may be due to forces having an effective pre-whistleblowing policy, where officers can report something to a supervisor, and it’s progressed to professional standards and dealt with effectively. The National Chair explained he would take this piece of work to the PFEW equality board for transparency and discussion.

Paula Barker MP asked what the view is of the Police Federation of England and Wales (PFEW) in regard to wanting to strike and whether they find it “galling” to cover for others who are striking. Mr Hartshorn stated that when the police are called to fill the gaps of the public sector workers who are on strike, it is “disheartening” for members who do not have the right to do so despite many feeling they are at breaking point. He said overall, officers do understand why the police do not have this right, but highlighted how bad their current situation is, Ms Khatkar added that with officers experiencing 400 – 600 traumatic incidents during their carers on average, they want to feel they are recognised for what they do and to be remunerated fairly.

They were further questions asked about the current wellbeing and mental health crisis in policing, based on the frontline Review, noting that some of the situations police officers will come into over a career that stands 20-30 years, can be “extremely distressing, extremely challenging, and extremely dangerous”.  Mr Hartshorn highlighted the stark PFEW Pay and Morale Survey figures, that demonstrate “low morale” and “high fatigue” across the service. He added that “people don’t want to come into policing, because it's not a good place to be”.

Diane Abbott MP (Labour) asked about the role PFEW plays “behind the scenes” in terms of cases such as David Carrick, and whether the Federation was blocking the suspensions of people like him. Mr Hartshorn explained clearly that the Police Federation do not have such a power and this was a misunderstanding of the work of the Federation. He added: “What we do is make a representation based on the process that’s been followed.” Ultimately, however, PFEW cannot change or enforce decisions around suspension within these processes.

Marco Longhi MP (Conservative) asked how confident the witnesses were that we can gain “real trust” back into policing. Mr Hartshorn offered practical steps to the committee including a focus on community-based policing and neighbourhood policing. He spoke of his desire for the police to be more “preventative”, adding that, at the moment police officers cannot give the public the service they want to because they are “constantly responding reactively rather than being proactive.” The Chair asked both witnesses whether they would join the police again if they were 18 or 21. Mr Hartshorn said sadly, no, because of the issues with the degradation of pay, pensions and conditions, he said the pressure on policing is too much. His honestly was applauded by Ms Johnson.

Finally, there was discussion around ‘clarity of mission’ for policing. The committee were keen to ask whether the new powers for police to deal with protests would see an improvement in efficiency when dealing with these matters. The witnesses highlighted that use of these powers must always be balanced against the protester’s human rights, freedom of expression vs the role of the police to protect local communities and disruption. Ms Khatkar explained: “We still have to apply the test of proportionality in all of our dealings.”

Following on from the earlier question in session one around fraud, both witnesses said it is a very complex specialist landscape and not all officers can be omnicompetent in a way that would enable them to understand the data involved in investigating fraud. It was agreed this is an area for prioritisation, but also acknowledged that a lack of resources has had an impact in this area. A solution would be to bring in more specialist officers or to train officers to the right level internally, however, both options require investment and proper planning.