‘I invite the Government to refute our survey findings’ 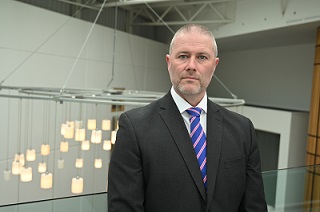 The thin blue line is damaged, and time is running out for the Government to correct course.

The Police Federation of England and Wales (PFEW) undertakes an annual survey to gauge the status for pay, morale and welfare for the more than 139,000 rank and file officers we represent. Findings of the latest Pay and Morale Survey have revealed everything we have been warning of, a mass exodus of officers, mental health crisis and disillusioned, underpaid colleagues. Police officers are at a crisis point and the police service is on its knees. The survey has laid bare that the Government’s all-around indifference towards our officers who serve and protect the public is significantly affecting their mental health, overloading them, and putting them and the public at risk.

These are not one-off cases, and I would challenge the Government to refute the voice of 36,669 police officers of England and Wales. Nearly one in five police officers plan on handing in their resignation as soon as possible or within the next two years due to reasons including unfair pay. The most frequently cited reasons respondents gave for intending to quit were low morale (98 per cent), how the police are treated by the Government (96 percent) and low pay (95 per cent).

I was not surprised when 34,468 officers said in the survey ‘they do not feel respected by the Government as our appeal to compensate officers for the risks they undertake is yet to be acted upon.

The vast majority (83 per cent) of police officers disclosed they are ‘dissatisfied’ or ‘very dissatisfied’ with their overall remuneration (including basic pay and allowances), while nearly one in five (19 per cent) reported ‘never’ or ‘almost never’ having enough money to cover all their essentials.

How can the Government continue not to act when 98 per cent of officers are struggling to afford to live? How is it acceptable that the very people who put their lives on the line to protect their communities are battling to feed their families?

Abysmal pay has resulted in police officers worrying about their household finances (69 percent) every day or almost every day, and it is seriously affecting morale. At least 87 per cent said their current pay had a negative impact on their morale with 95 per cent attributing low morale to the way police officers in England and Wales are treated by the Government. Let that sink in, almost every single officer who responded to the survey feels disrespected by the Government.

I welcome the Prime Minister inviting union leaders to the table, and support his request for “…a grown-up, honest conversation about what is responsible, what is reasonable, and what is affordable for our country when it comes to pay.” However, it brings into stark focus the questions I have been asking from decision makers over the last year: Why are my colleagues the only group of frontline public sector workers being punished? Was a mistake made in 1919 by giving up our right to strike against the promise of fair pay? Why is the police service being actively vilified and the needs of the service ignored?

The intention of PFEW’s annual survey is not to cherry-pick forces or individual comments but to understand and share the reality of the job for front line police officers.

While the Government’s highly ambitious project to recruit 20,000 police officers by March this year is appreciated, they cannot turn away from the fact that 25,668 officers have told us they would not recommend joining the police force to others and 6,600 of them have an intention to resign from the police service either within the next two years or ‘as soon as they can’.

It undermines the police service when the Government is unable to retain talent and aims at spending to recruit new officers, whilst not considering population growth or the devastating cuts made to the service. The reality is that 88 per cent of our officers who responded to the survey do not feel there is enough of them to manage the demands being made on them as a team or unit. Our warnings of increased, overwhelming workloads and
unsafe single crewing have come to pass.

We asked our members what they think, and the results of our survey clearly illustrate the anger and disillusionment of police officers across England and Wales. Many have stopped expecting any recognition from the Government for their unique responsibilities and the restrictions imposed on their industrial rights and their lives, which is, quite frankly dangerous.

Almost one in five (18 per cent) reported they had suffered one or more injuries that required medical attention as a result of work-related violence in the last year. All assaults on emergency workers are unacceptable, but the Government must compensate officers for the risks they take in the line of duty. This is unsustainable.

I invite the Government to take action and remember they came into office on the back of a domestic agenda pitch, which included a focus on crime and policing, that made the voters of our country hand in an 80-seat majority in the last general election. Apart from being servants of the Crown, police officers and their families are very much part of the same electorate.

Being able to protect the public effectively, rests on a knife edge.

It is paramount the service is provided with long-term investment, instead of single-year settlements to future-proof the service. The Government must listen and not ignore the needs of the service because our officers do not have the right to strike.

To rebuild the broken thin blue line, police officers need a pay award that acknowledges the cost-of-living crisis, their unique responsibilities and the restrictions imposed on their industrial rights. Otherwise, the profession will remain at risk and the disillusionment of our colleagues will deepen, the Government must act.