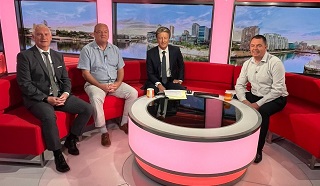 The Police Federation of England and Wales (PFEW) is continuing to press the Government to create a new award which honours fallen emergency service workers who make the ultimate sacrifice while in the execution of their duty.

The campaign officially launched by PFEW, the Police Superintendents’ Association and the Prison Officers’ Association in April is gaining momentum and has so far received cross-party support as well as the backing of the Scottish Government.

Together they are lobbying for Home Office approval and are seeking cross-party support to enhance the current honours and awards system, which fails to adequately reflect the dedication, commitment and sacrifice of those individuals who lost their lives in keeping their local communities safe.

The campaign has also been supported by Bryn Hughes, whose daughter PC Nicola Hughes and her colleague PC Fiona Bone were murdered 10 years ago, and the families of fallen officers across the United Kingdom.

In a powerful BBC Breakfast feature which aired today (4 August), David Taylor, whose father PC George Taylor from Police Scotland who was killed on 30 November 1976 by Robert Mone and Thomas McCulloch, was joined by Bryn and Adrian Hunt.

Adrian is calling for the medal in honour of his father, Detective Sergeant Ross Hunt, who also served Police Scotland and was killed on duty on 5 June 1983. He was 56 years old and had more than 30 years of police service behind him.

"The wider police community are really proud of the legacy these officers have left. Yes, it's personal, and yes, it's public; but at the end of the day, we look back with fondness, sadness, and pride,” Adrian explained.

“They chose to do the job they did knowing full well what could happen; however, their legacy was us and we have memories but nothing tangible, nothing for the pride of what they did - the heroism,” added David. “They deserve this, a tangible thing, even if it's just to look at, which we can touch, which recognises what they did for the greater community. It's well-deserved without any shadow of a doubt.”

In 2021, they were told by the Secretary of State for Scotland, Alistair Jack, their latest request for a medal had been disappointingly refused by the Home Office and Cabinet Office in Downing Street.

“We are supported a massive amount by the Police Federation, and we've got cross-party support from a number of MPs - it just seems the wheels of bureaucracy are turning a little bit slower than what we would like, and we want to keep on pushing.”

PFEW National Board Member John Partington, commented: “The Police Federation of England and Wales continues to work alongside Bryn Hughes and other families in their call for a posthumously awarded medal for those who die in the execution of their duty.

“I repeat my call to the Home Secretary to resolve this matter with urgency so the families of all emergency service workers who have lost their lives while serving their communities can count on the state recognition they deserve.”