Having a posthumous medal would mean so much to families 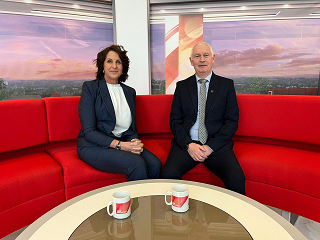 The Police Federation of England and Wales (PFEW) continues to call on the Government to create and initiate an honorary award that will be awarded to those who work in the emergency services and are killed in the line of duty.

National Deputy Chair Tiff Lynch and Bryn Hughes, whose daughter PC Nicola Hughes and her colleague PC Fiona Bone were killed in the line of duty 10 years ago, appeared on BBC Breakfast this morning to raise awareness of the Medals for Heroes campaign.

Bryn is also running different marathon across the world to spread the message. He travelled to take part in the New York marathon where he met with Haylee Shuping whose husband was also murdered in the line of duty.

Unlike in the UK, the USA awards the Medal of Valor to public safety workers for acts of heroism and those killed in the line of duty. Mr Hughes heard how important the medal is and what it means to the families that receive those medals in the USA and hopes the UK Government will soon be able to do the same.

Haylee Shuping, who spoke about the moment she received the medal, said: “I was so proud of my husband for his sacrifice and sincerely appreciated having that recognition from our country recognising his service.”

During the interview with BBC Breakfast, Tiff Lynch added: “It’s not until you walk in the families’ shoes that you get that understanding and the feeling of how much this means to them. There is currently no formal recognition from the state.

“We’ve spoken with numerous MPs, and we’ve not had one MP who doesn’t support this campaign. Philip Davies MP wrote a letter to the Home Secretary and said himself, ‘we are here to make the laws, let’s make this law so all emergency service workers are formally recognised for the sacrifice they make in dying in the execution of their duty’.

“Having a posthumous medal would mean so much to families, recognising and appreciating the work of those who gave their lives to their jobs. Work in the emergency services is a dangerous profession, where staff sacrifice personal freedoms to serve the public. This nation needs to build a symbol of gratitude, sacrifice, and remembrance.

“What we are asking for is for someone from the Home Office to come and meet with us and discuss what the need is and how we can move this forward.”