The second and final day of our first Race, Religion and Belief (RRB) Seminar focused on important issues including police scrutiny and the issue of trust in the community. 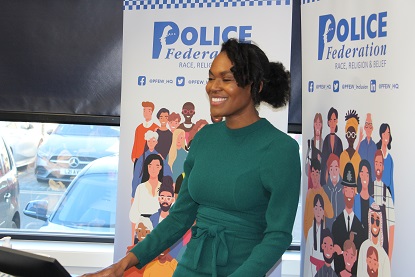 Abimbola Johnson, Chair of the Independent Scrutiny and Oversight board

The seminar, which was organised by RRB group Chair Paul Odle, Equality Lead Ian Saunders, and National Board member Zac Mader, attracted a diverse audience from across England and Wales.

The agenda featured Abimbola Johnson, the Chair of the Independent Scrutiny and Oversight board, who came into post last year after being appointed by the National Police Chiefs Council on behalf of law enforcement’s leadership. The London-born barrister, whose heritage is British Nigerian, spoke about her role and stated that the solutions for issues around race and ethnicity could only be solved by the entire police service.

Highlighting the fact it was now two decades since the Macpherson inquiry and the phrase ‘institutional racism’ is still such a difficult topic of conversation within policing, she said: “I’m really passionate about creating lasting changes in the space that I occupy. But I don’t think it’s any coincidence that given my background, I’m often one of the very few black people in any room.”

She looked back on the 2020 murder of George Floyd and told how the incident changed how she personally discussed race. The barrister added: “Prior to that I was using a lot of muted language. I spoke about diversity, and I spoke about inclusion. I would only speak openly about race with my black colleagues - but when I was in mixed company, sometimes I found myself changing my language, to make others feel comfortable.

“But 2020 was an opportunity to bring those issues to the foreground. It was a relief – it meant the conversation was more confrontational, but it meant the discussion moved in a right direction in a way it wasn’t before.”

The leading lawyer explained how she was tackling the scrutiny and oversight role, and added: “I really hope that through this plan we will see changes. But to do that we need to talk about racism, not just racial disparity.

“We need to talk about the experiences of black people and not this mythical BAME community that doesn’t actually exist. We need to dig into the language, and into the vocabulary of what we are discussing, so we can have really honest conversations about what we need to do to move things forward.”

“You need to be protected as police officers by having proper checks and balances on the powers which are given, so if someone sees a colleague who is repeatedly using their power in a way that is worrying, you can go and check records. For instance, you can see if they keep repeatedly stopping people who fit certain a racial profile with no justification behind it.

“It’s important when we are talking about anti-racism work to talk about it from an organisational perspective, and not just in terms of ‘bad apples’. 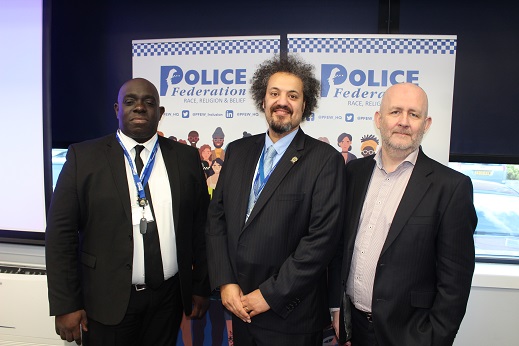 “It isn’t about individual police officers being racist. It is is about the fact an organisation does not adequately equip individual officers to provide the service to people that is required because of colour, culture or ethnic origin. The reality is policing wasn’t created with a mind on the ethnic, multi-cultured society we have today.”

Other speakers at the seminar included Alex Gent, Chair of the National Association of Muslim Police, who spoke about the negative stigmatisation of Muslim officers and gave a revealing glimpse into the issues faced by colleagues, and Vernal Scott, Diversity and Inclusion Manager at Essex Police.

After the event concluded, RRB group Chair Paul Odle said organisers had learned valuable lessons from the seminar, and that feedback from the event would be carefully analysed in the coming weeks.

He said: “It was really encouraging to see so many colleagues from diverse backgrounds discussing difficult topics candidly and honestly. It was also great to see so many people speaking passionately about topics they may not have openly discussed a few years ago.

“Our job now in PFEW’s Race, Religion and Belief group is to carefully consider these many opinions and take the action points forward.”