A bonfire of police rights and Government promises 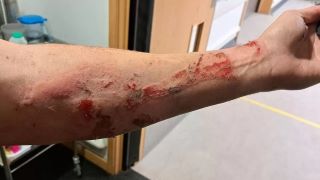 Serious burn injuries suffered by a Northumbria police officer in a rocket attack.

Another year, another Bonfire Night and, yet another series of life-threatening attacks on police officers. You may think “here comes another condemnation”. Yes, we are condemning the incidents targeting police officers in different parts of our country on 6 November 2022, as we have on previous occasions, and we will continue to until the Government does much more than make manifesto promises of making our “streets safer” with no thought as to how to support police officers to do so.

It is time the Government put its words into action.

If the viral videos on the internet showing rockets, petrol bombs and Molotov cocktails being thrown at police officers is not a good reason for the Government to urgently address PFEW’s concerns over police officers’ pay and working conditions, perhaps its own data would help. According to the Home Office, in the year ending March 2022, police officers in England and Wales suffered 41,221 reported assaults with 11,730 crimes involving injury to a police officer. This is an increase of 11.5 per cent compared to the previous year and the number is bound to be higher as many incidents remain unreported.

If you ask me, and I am sure the most ardent of our critics would agree, attacks on police officers and communities are still criminal acts. This behaviour from groups of people who have no regard for anyone else’s safety needs to be dealt with as being assaulted is not something police officers should expect to happen to them at work. The very fact that policing has a dedicated mechanism, Operation Hampshire (for assaults on police officers), to address the scale of the situation should in itself raise concerns.

There is a real misconception that being assaulted is somehow an acceptable part of a police officer’s job.  It should not be. The Government of the day must remember they came into office on the back of a domestic agenda pitch, which included a focus on crime and policing, that made the voters of our country hand in an 80-seat majority in the last general elections. Apart from being servants of the Crown, police officers and their families are very much part of the same electorate.

The trust they have placed in the Government demands it goes beyond issuing headline-friendly statements.

Long-term funding cuts, real-term pay cuts – at least 25 per cent at the prevailing inflation rate, and the perennial shortage of officers and state-of-the-art resources to tackle the ever-evolving challenges faced across the 43 forces in England and Wales are taking an indescribable toll on the wellbeing and ability of officers to perform their duties effectively and efficiently.

PFEW has been appealing to the Government to establish a systematic approach for evaluating the P factor and including it in the police pay across ranks and pay points. Incidents such as last week strengthen our resolve that until an evaluation is undertaken, by an independent body, the Government must accord a fixed percentage in line with the military X factor for the dangers faced in the job.

I am prepared to reason with anyone in the Government who is against recognising the effects and limitations police officers experience to both their personal and professional lives. How is it wrong to expect that elements such as risk to physical and psychological health, legal constraints, socio-economic impact, and the unique situation preventing police officers to take industrial action for employment rights are covered in their pay?

Our pay campaign will continue to appeal the Government to establish a pay system that takes into account P factor of police officers in England and Wales.

Our members work tirelessly to uphold the law and protect lives in every possible circumstance and situation, and PFEW as the undisputed voice of policing will continue to support them and fight for fairness. We will not stop until police officers receive fair pay.