Womens’ group speaks out against misogyny in powerful session 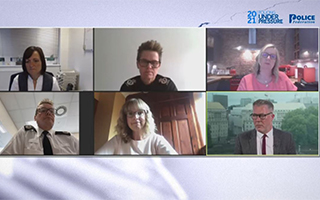 The theme of the session explored the ways in which female police officers can still face discrimination in the workplace. Zoë Wakefield underlined her message with examples of abusive messages she and other female members have received on social media simply for doing their job.

Zoe also highlighted questions that women have received from other police officers about their competency for the job – for example, one female officer was challenged on her desire to be a firearms officer with questions about whether she was physically strong enough to wear all the kit.

On the question of such comments being ‘banter’, CC Rachel Swann pointed out, “It isn’t about not having fun – having a laugh is important for destressing - but it shouldn’t come at someone else’s expense. We’ve made other kinds of banter, around sexuality and race, off limits, but it still seems gender is okay to joke about.”

Rachel presented on the current work of the NPCC around gender and discrimination, including the National Violence Against Women Strategy designed to help create a safe environment for women and girls. The strategy also aims to effect change to this end within policing.

ACC Mark Travis then gave a presentation on gender discrimination in the workplace. Showing the severity of sexual harassment (90 per cent of female staff surveyed recently in Wales said they had experienced sexual harassment in the workplace), Mark emphasised that “When we talk to people who experience this harassment, they don’t want things to escalate, they don’t want a big, formal process, they just want the behaviour to stop.

“They just want respect, a good attitude, and to be treated professionally in the workplace.”

The panel also took questions from the audience on topics such as promotion and flexible working. Sue Honeywill spoke powerfully on the discrimination women who go on part-time leave for childcare face: “When it happened to me, I was still the same person, with the same abilities to offer the force. The only difference was, I was part time.”

Belinda Goodwin remarked: “You still get eye rolls when you talk about ‘female’ issues. It’s just about creating change and bringing barriers down so we can discuss things properly.”