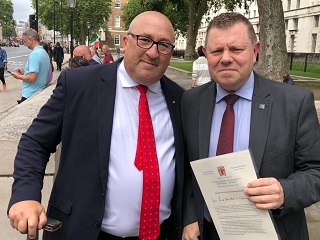 National Chair John Apter has written a forthright letter to Downing Street expressing how our membership feels towards the Government, demanding it overturns its zero percent pay award decision and calling for a fairer pay review system, not influenced by government.

The action follows last week’s National Council meeting where those present voted through a motion of ‘no confidence’ in the Home Secretary and agreed to walk away from the ‘not fit for purpose’ Police Remuneration Review Body.

The letter states: “This is about much more than money, though for many the offer of a zero per cent pay rise, after all the police has been through in helping deal with the pandemic, was the final straw.

“It is about the failure, despite the promises of the Home Secretary, to take seriously our request that police officers should be given early priority for vaccination. It is about the very strong feeling we have, not least when the Prime Minister and Home Secretary spoke at our Annual Conference, that the warm words flow easily, but the actions that show genuine support for the police do not.”

We are now calling for a complete reset of the relationship between government and
the police, starting with the following three requests:

1. Stop taking police officers for granted and treat them with respect;
2. Agree to work with us on an entirely new and fairer system of remuneration
decision-making; and,
3. Reverse the zero percent pay award decision and give our police officers a
meaningful pay increase.

The letter continues: “Just this weekend, we found out through a Sunday newspaper column about a new so-called Beating Crime Plan. We don’t need old ideas presented as new, we need genuine investment for the whole of the Criminal Justice System and genuine consultation over new ideas. Without that, this is just another ill-thought out initiative.

“Police officers are sick of gimmicks. Sick of underfunding. Sick of mixed messaging putting police at risk. Sick of government contempt for police. It’s time for a total reset of police-government relations,” it concludes.