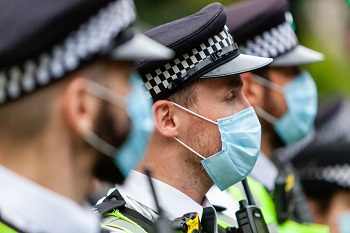 The impact the pandemic has had on rank and file police officers has been revealed after a Police Federation of England and Wales (PFEW) survey showed 65 per cent of respondents reported the crisis has had a negative impact on their morale.

The influential survey gave more than 130,000 officers their first opportunity to provide detailed feedback on how policing the pandemic affected finances and personal wellbeing.

The damage caused by COVID-19 was starkly illustrated as more than three quarters (76 per cent) of respondents felt that they were unfairly paid for the risks and responsibilities of their job during the pandemic.

90 per cent considered the factor most likely to have a detrimental effect on their morale was how the police as a whole are treated, while 70 per cent claimed this factor had a major impact on their intention to leave.

PFEW’s Pay and Morale Survey gathered members’ views on pay and conditions, as well as attitudes to work and the police service. Since 2014 it has been one of the largest annual surveys of police officers conducted within England and Wales.

The Pay and Morale Survey 2020 covered a wide range of subjects and canvassed views on topics such as pay, the cost of living, morale and the proposed police officer uplift.

It was compiled by PFEW’s in-house Research and Policy Department, which plays a vital part in providing strategically important evidence to achieve better pay and conditions for members.

The survey generated over 25,000 responses which is approximately 20 per cent of all federated rank officers in the whole of England and Wales.

National Chair of the Police Federation of England and Wales John Apter said: “These results should give serious concern to chief constables and to government. The low morale reported by officers comes as no surprise, but the police service needs to take its head out of the sand and acknowledge we have a serious issue. My colleagues take the time to fill in these surveys and give their honest views, so it would be a failing by police leaders to ignore what is being said.

“This year, more than ever, officers have been put under significant pressure, dealing with the day job as well as policing the constantly changing Covid rules. Despite doing their very best, they have been turned into the villains of this pandemic by some, damned whatever they do; and this constant criticism takes its toll. Whilst it might come as a surprise to some, police officers are human beings; they have their own worries about the virus and the fear that they take it home to their families.

“I accept that the wellbeing of police officers is considered more now than it has ever been in the past, there is some good work going on in some forces, but the benefits of this good work are still not being felt by all of our members and that is a serious issue. This must be seen for what it is, a cry for help from police officers who need to ensure their voice is heard. If these results are ignored by police leaders, then this will be a failing that will be unforgiveable."

The survey also revealed that 86 per cent of officers who completed the survey did not feel fairly paid in relation to the stresses and strains of the job.

Mr Apter continued: “During the last decade officers have had an 18 per cent real term pay cut; now they face a public sector pay freeze next year, penalising the very people who have kept the wheels turning in the fight against Covid-19. Recruiting more police officers is welcome but looking after and valuing those doing the job now is every bit as important too.”

Local reports can be found on our Survey Hub.