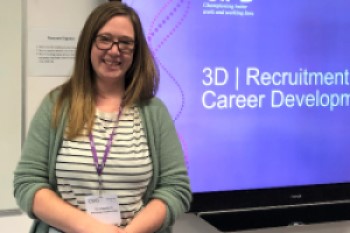 A cutting-edge study of new recruits by researchers at the Police Federation of England and Wales has been presented to delegates at an international conference for people management and employment policy specialists.

It included revealing data from PFEW’s Research and Policy Support division’s ‘Through Career’ ongoing research programme, which surveys new recruits at the beginning and the end of their probationary period. Dr Boag-Munroe’s research revealed that:

Dr Boag-Munroe said: “It was a tremendous honour to be able to showcase the work we do within the Research and Policy Support division in front of a distinguished audience.

“Our research programme surveyed new recruits when they initially joined the service then again at the end of their probationary period.

“We discovered from the data that statistically significant differences were observed after two years as a police officer in career priorities, work values and the perception of policing as a ‘career for life.’

“There is currently a drive to recruit 20,000 new police officers in England and Wales and understanding what police officers want from their careers is critical to achieving this objective.

“The work of the research department feeds directly into this recruitment of new officers and, importantly, can help to motivate and retain them once in post.”

The Federation’s respected Research and Policy division plays a vital part in providing strategically important evidence to help achieve the best pay and conditions for members.