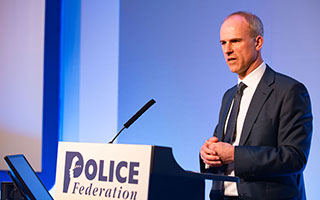 The National Police Chief’s Council lead on Roads Policing was the keynote speaker on day one of the Roads Policing Conference in Kenilworth. He used the platform to stress that officers who police the highways should not consider their role to be only about disrupting crime.

Mr Bangham warned that road fatalities had been falling in the first half of the last decade, but had stabilised and begun to rise again, with 1,784 recorded in 2018 and figures for this year showing signs of following the upward trend. This equates to almost five deaths every day.

He said: “We need to ask questions about what we can do better if we are truly committed to reducing the totally unacceptable rate of deaths on our roads. Twice as many people die on our roads than through knife crime and yet you hear so much about that every day – you can pass through the papers and not read about the deaths on our roads. Something has to change.”

West Mercia’s Chief Constable added his disappointment that it is still possible today for a force to be visited by Her Majesty’s Inspectorate of Constabulary without being asked questions about roads policing – “that is unacceptable”. He sounded a more optimistic note about the government’s promised uplift in officer numbers, which could be a game changer if a strong case is made for roads policing to get its fair share of investment.

Statistics show that 27% of fatalities are caused by occupants of vehicles failing to wear a seatbelt. The majority of those deaths “could be prevented if police officers are out there enforcing the law” around seatbelts, Mr Bangham said. In his view, punishments for the ‘fatal 4’ – no seatbelt, speeding, using a mobile phone while driving, or drink/drug driving – ought to be of equal severity since each behaviour can result in loss of life.

Responding to a question from delegates, he spoke about the difficulty in getting the National Chiefs Council to focus its attention on roads policing, due to the many competing priorities, but said the issue has got “airtime” at last. This offers a possibility for roads policing to be viewed more strategically by leaders in future, rather than seen as a local issue.

Mr Bangham also urged forces to ensure their new recruits make full use of their roads policing powers, and carry out stops rather than relying on cameras – as this inevitably leads to the detection of more crime.