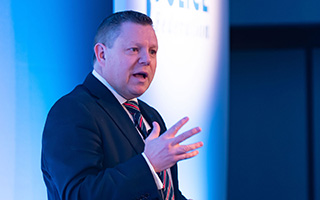 John Apter kicked off the Roads Policing Conference in Kenilworth earlier today with the message that roads policing is essential, not a ‘nice to have’.

The Police Federation’s National Chair addressed a packed room at the start of the two-day event and spoke of his pride as a former roads officer, investigator and family liaison in Hampshire. He acknowledged that roads policing officers see “too many things that people shouldn’t have to,” before admitting he still has “nightmares” about some of the incidents he dealt with.

The conference started on a sombre note as delegates stood for a minute’s silence to remember PC Nick Dumphreys, of Cumbria Police’s road policing unit, who tragically died on duty on Sunday.

Mr Apter touched on the decade of austerity cuts which had devastated roads policing. He said: “Roads policing is not a nice to have or a ‘we will do it if we can’ but that’s how it has felt over the last 10 years or so.” Stakeholders had failed to shout enough about it, and it had suffered, he said.

He acknowledged neighbourhood policing as the bedrock of the service, but posed the question: “What about those hundreds of thousands of people who use our road network every day?

“They deserve to be policed, to feel safe and to have those antisocial, or drunk drivers caught by dedicated, professional, well trained police officers,” he added.
The promise of more funding and 20,000 additional officers offers the prospect of “exciting times” for policing, said the National Chair, but it will be crucial to get the message out that roads policing is vital for safety, security and crime reduction so it is not forgotten in the uplift.

Kit Malthouse MP, the Policing Minister, addressed the conference via video. He thanked roads policing officers for their dedication to the public and spoke of two key priorities for the government going forward. The first is a drive to reduce road fatalities – a review of road safety is pending – and the second, as a result of Police Federation campaigning, a Bill is coming before Parliament to make sure that police drivers are accountable to a new test that recognises their training, rather than assessed against the driving expected of a member of the public.