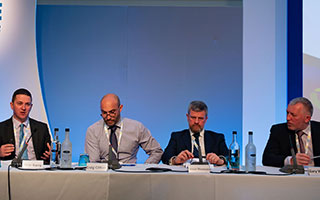 One of the most challenging questions was on situations when Post-Incident Procedures (PIPs) should be called and weren’t. When panel moderator Ché Donald asked the room if they had experienced this, a number of hands went up. ACC Steve Barry emphasised the importance of PIPs to the family and victim, as well as the officers themselves.

Adding to this, Inspector Craig Clifton, PFEW Roads Policing User Group Chair, described the work that goes on ‘behind the scenes’, especially in regards to the tactics directory (giving examples of tactics for use with armed pursuits): ‘If you do think of something, even if you think it’s a bit off the wall, it’s certainly an idea worth sharing’.

The group also addressed the question of using special constables in pursuits. Steve Barry welcomed them as ‘a valuable resource that should be utilised as far as possible, but they should never replace warranted officers.’

‘As long as they’re protected and aware of the consequences, I don’t see why not’, Craig Clifton added. Gary Wright of the IOPC agreed with ACC Barry but raised the issue of what would happen if a volunteer was involved in a fatal incident.

Discussing tactics, ACC Steve Barry said: ‘The problem with my position is that I can recommend tactics - in this case for pursuit- but I can’t order people to use them. This makes sense when they can’t use the tactic due to lack of resources, but if the rationale is that it’s too risky then I will very happily have a conversation with anyone about the risk/benefit analysis we’ve done for the past three years.’

The panel also touched on: legislation changes, use of helicopters and other air support in pursuits, single crewing, wellbeing of roads officers, motorcycle tactics development, increasing role of technology in pursuits, capacity and, SMART motorways.