A Federation Representative and Trustee from Staffordshire Police Federation received a surprise worthy of a hero when a visit to a popular tv show turned into a meeting with pop idol Olly Murs – and a Pride of Britain award.

PC Claire Bond’s family conspired with award organisers to set up the once in a lifetime opportunity by telling her she was being given a private tour of the set of her favourite talent show, The Voice. But as she sat in a spinning chair of her idol, presenter Olly Murs, she heard a familiar song from behind her- Dear Darlin’, her favourite. 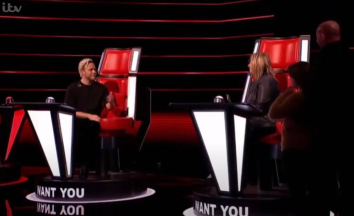 PC Bond spun the chair to see Murs himself, crooning a song just for her. And in his hands, a Pride of Britain Award.

PC Bond said: “Receiving a Pride of Britain Award has made me so emotional to think that people deem that I am worthy. I am just one person who has tried to make a difference.

“I really want to dedicate this award to Dave, my work colleague who pulled me to safety, my husband Darren and each and every police officer who gets injured in the line of duty.”

PC Bond received life changing injuries when she bravely battled to stop an out of control vehicle from ploughing into hundreds of runners taking part in a 10k race further down the same road.

PC Bond responded to the incident in September 2018 after reports that a vehicle had crashed into a garage not far from the race, a popular event in Staffordshire. The driver, a drug dealer, saw the police, panicked and tried to speed away – towards the oblivious runners. As PC Bond struggled with him and tried to grab his keys, the officer was crushed against a fence and dragged along the ground, ruining her leg.

She was eventually pulled to safety by colleague PC Dave Mullins and had to undergo a five hour operation to save her shattered leg.

Despite sustaining such severe injuries, PC Bond used some of her time off work to help others, competing in the same race the next year to raise money for the charity Care of Police Survivors, completing 9k in a wheelchair and finishing the last kilometre of the race on foot.

The ceremony was hosted from the Royal Chelsea Hospital by star Carol Vorderman. The Emergency Services slot was introduced by daytime TV host Holly Willoughby.