The longest-serving female police officer in West Midlands Police Force is among 17 rank and file officers and two members of the Special Constabulary who are recognised in The Queen's Birthday Honours list today (10 October). 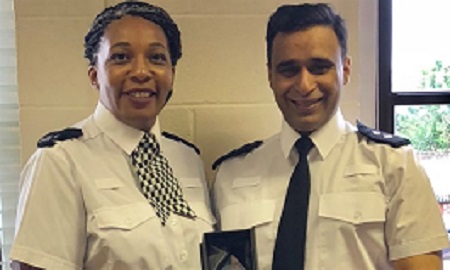 PC Rani Gundhu, who joined the Force 33 years ago, has worked in various specialist departments and is now part of a ‘Positive Action’ team taking steps to improve equality in the workplace.

She said: “I am delighted to receive this honour, I so wish my late father was with us to witness this, it truly is a huge shock. Thank you so much to all the people that made this happen, for I am but a humble soul doing my part for humanity.

“I've seen a lot of changes in policing over the last three decades, but my desire to make a difference remains as strong now as it did when I first joined.”

Chief Inspector Mo Aziz and PC Ruth Honegan from Bedfordshire Police were both honoured with the British Empire Medal. The pair helped recruit record numbers of police officers from diverse backgrounds, transforming the force into one of the most representative police forces in the country.

Retired PC Charles Crichlow, who was honoured with The Queens Policing Medal, joined GMP in November 1990 before retiring in March 2020. He held the position of President of the National Black Police Association (NBPA) for four years and made a significant contribution to national policing policy.

Charles, who worked within Greater Manchester Police to promote diversity and equality of opportunity, said: “It’s great to be recognised, particularly after completing 30 years of public service.”

PC John Williams, GMP, who was recognised with the British Empire Medal, joined the Force in 2001 and worked in district roles before starting his current post in the Serious Collision Investigation Unit.

John often attends community events, schools and scout groups to promote the role of the police within the local community, and when not working spends time volunteering and fundraising for charity.

Sgt Dave Clarke, an officer with Durham Constabulary since 1996, was awarded the British Empire Medal. He helped set up a community café, youth club, and radio station as part of his commitment to help his residents in Stanley.

He said he has loved every minute of policing, adding: "It has given me chance to work in the very heart of the community, helping protect vulnerable people and make it a safer place. I have come across some of the nicest people I have ever met in Stanley: they just need help to get their communities back where they were."

Among Dave’s first arrests was a burglar who he arrested again 20 years’ later. He explained: “After a while, you get to know them. They commit crime because they have fallen into the grip of drugs and they do it to feed their habit, which is why the forward-looking approach of the Force in trying to deal with the underlying causes behind crime works so well. If you can help them solve that problem, then you can make a difference to them and the community they live in."

The Met’s Senior Chaplain Jonathan Osborne was made a Member of the Order of the British Empire. Reverend Prebendary Jonathan Osborne joined the Met 11 years ago and has been called upon to support officers and staff and respond to numerous tragic events, including the Grenfell Tower fire.

He supported the Met and PC Keith Palmer’s family following the events in Westminster in 2017 and serves as a volunteer police officer. For the last three years, Jonathan has also served as Deputy Priest in Ordinary to Her Majesty the Queen at the Chapel Royal.

John Apter, National Chair of the Police Federation of England and Wales, said: “It is an extraordinary achievement to receive such recognition from Her Majesty the Queen and I want to congratulate all my colleagues who have received an honour on this special day.

“This is the result of the exceptional professionalism and dedication shown by colleagues in the Federated ranks. Police officers don’t do what they do for any recognition but to be recognised in this way is a great achievement and each individual should be incredibly proud.”

Sir Philip Barton, Permanent Under Secretary at the Foreign, Commonwealth and Development Office and Head of the Diplomatic Service, said: “I congratulate everyone receiving an honour and thank them for their hard work and years of service.”

MEMBERS OF THE ORDER OF THE BRITISH EMPIRE

MEDALLISTS OF THE ORDER OF THE BRITISH EMPIRE