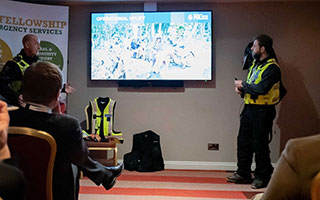 Set up in April 2017 following a record number of anti-social behaviour complaints, members of an off-road motorcycle unit shared the secret to their success at this year’s Roads Policing Conference.

Following an initial pilot programme, the South Yorkshire unit quickly proved its worth with a 49% reduction in ASB complaints just two months after it was rolled out.

Officers with a previous interest in motorbikes were brought in from Sheffield, Doncaster, Rotherham and Barnsley.

The team’s strategy focused on three key areas: education, enforcement and provision.
Determined to tackle the fact that many young people in the area were getting involved in antisocial off-road motorbiking, they partnered with local schools to educate young riders about how to pursue their interests safely and legally. A leaflet was also produced and handed out at local trade and law enforcement shows.

As part of the enforcement angle, the off-road team used their expertise in various areas such as inner-city policing during Sheffield’s Christmas market, missing person searches and rural crime. They also used social media and data analysis enabling them to be more strategic while gathering vital intelligence.

Provision had been the hardest aspect of this strategy. However, as the team continued to experience success it was awarded more funding from local authorities in Sheffield, Doncaster, Rotherham and Barnsley.

The South Yorkshire officers also expressed their desire to help other forces set up bike units and advice on how to navigate the various hurdles involved.