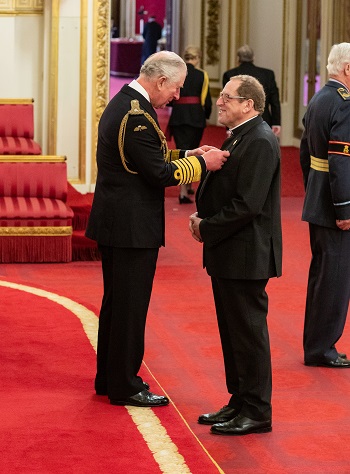 The Police Federation of England and Wales is pleased to congratulate Reverend Canon David Wilbraham in being awarded an MBE for his services to policing.

National Police Chaplain Rev Canon Wilbraham, this week received the accolade from Prince Charles for his contribution and dedication to policing for more than 40 years.

David works for Police Chaplaincy UK and coordinates National Police Memorial Day (NPMD), as well as being involved with a number of other police charities. He was also force chaplain at Thames Valley Police for 11 years up until 2018.

But it was back in the 70s where his journey within policing started – sporting a pair of cuffs instead of a clerical collar.

He passed out becoming an officer in Merseyside Police in 1977 where he served as a Police Motorcyclist before joining Surrey Police in 1988 as a welfare officer where he remained until 2003.

PFEW National Chair John Apter, who is also NPMD Chair of Trustees said: "On behalf of all of us, massive congratulations to David, who is so deserving of this recognition.

"He puts his heart and soul into everything he does and is so well respected amongst the policing family and beyond.

"David has done so much for policing and for police chaplaincy over the years and this honour is very much deserved."

Speaking about his reaction to being awarded an MBE David said: "Policing, in one guise or another, has been my vocation and passion for over 40 years.

"I am humbled and thrilled to receive this recognition and award. It was totally unexpected, and I feel very accepted and appreciated. Thank you to all whose lives, over the years, have helped shape who I am. I am grateful for their influence.

"It was an amazing day. Being awarded by Prince Charles was such a nice touch as he is the patron for National Police Memorial Day."