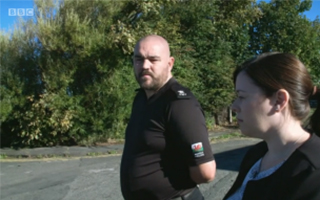 Det. Constable Beverly Humphries and PC Gary Cooper return to the road where Humphries was injured

The fourth episode of BBC1’s Critical Incident this week (Thursday 15 October) looked at the current state of policing in contrast to previous three Specials on knife crime, assaults on officers, and policing the pandemic.

National Chair of the Police Federation of England and Wales, John Apter paid tribute to the bravery of frontline officers.

Mr Apter said: “Every day I read about incredible acts of bravery. It’s not all over the news headlines, but I think it’s important that the public understand the level of courage, bravery and thankless sacrifice that goes on with policing every day.”

The programme vividly illustrated this bravery with real-life stories. These included the heroic actions of PC Jodee Tubby, PC Dave Gillham, PC Matt Smith, and Inspector Jamie Little of Kent Police, who related their dramatic cliffside rescue of a man dangling eighty feet in the air. Inspector Sara Sleeman, from Gloucester Police, also spoke about a brutal surprise assault which resulted in a serious injury to her skull.

Also appearing were Sergeant Tim Pottle and PC Mark Patterson of Merseyside Police, PC Dale Harwood from West Midlands Police, PC Claire Bond, and former police officer Simon Mudge, who spoke about the complex PTSD he suffered following a number of assaults.
The episode explored the benefits of police dogs in frontline roles and as therapy aids for officers with post-traumatic stress disorder. 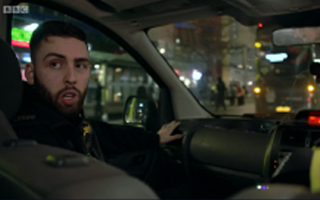 Wednesday’s episode was a Special on the COVID-19 pandemic and detailed the horrendous treatment many officers receive from offenders.

The episode featured John Apter, National Chair of the Police Federation of England and Wales, who discussed the rise in assaults on officers in lockdown when other types of crime reduced in number. He emphasised how spitting and coughing attacks on emergency services workers had become a disgusting -- and deadly - new hazard for frontline workers.

Also featured on the programme were Detective Chief Inspector Lewis Basford of Essex Police, Chief Constable Alan Pughsley, PC Pete Ormerod and PC Jodee Tubby of Kent Police. Sergeant Sean Underwood of Avon and Somerset Police described the mental anguish caused when a suspect spat at him during one incident.

Tuesday’s episode was a Special on knife crime and illustrated the human cost frontline officers are paying as they deal with the impact of a growing issue. Mr. Apter outlined the Federations’ strong stance on supplying defensive equipment such as TASER to officers.

Speaking on the programme, he said: “You’ve got somebody in front of you who wants to cause you harm - so sometimes you’ll have to fight for your life. It doesn’t look pretty, but sometimes that’s exactly what’s needed. I’d rather my colleagues be well prepared, well equipped and well trained, rather than go to another police officer’s funeral.”

In Monday’s episode, Mr Apter paid tribute to the bravery and courage of officers who have been assaulted on duty. He featured on the show alongside Sergeant Tony McGovern, Head of the Met’s specialist Moped Crime Unit, PC Ian Bruce from Manchester’s Tactical Vehicle Intercept Unit, and his colleague Sergeant Danny Kabal. They were joined by Detective Sergeant Steve Court (Head of Operation Windwhistle), PC Mark Brind, and PC Gary Cooper and his colleague Detective Constable Beverley Humphreys - who received life-changing injuries after being dragged behind a car by a suspect.

You can rewatch every episode from 12-16 October on BBC iPlayer here.