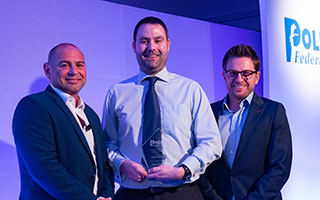 A police officer who overcame a serious injury on duty has been honoured by the Police Federation of England and Wales (PFEW) at its annual Roads Policing Conference for his “passion for roads policing and determination to hit criminals where it hurts”.

PC Geoff Newman from Surrey Police was named as this year’s winner of PFEW’s ‘Outstanding Contribution to Roads Policing Award’ at a ceremony held in Kenilworth on Tuesday evening.

PC Newman, a member of Surrey Roads Policing Unit, was involved in a collision during a pursuit in 2018 which left him with a serious back injury that resulted in him being mainly office-based for the last 18 months.

Despite injury, his tenacious and positive attitude has seen him utilise skills and expertise to ensure that colleagues have first-class criminal intelligence which has allowed them to target and disrupt a number of high-level organised crime groups and county lines gangs, helping to lock up numerous offenders.

PC Newman was nominated for the award by his sergeant, Chris Schultze, who said in his submission: “Geoff is persistent, some would maybe say obsessively so! His tireless work against vehicle-enabled organised crime is immense. His diligence, passion and knowledge of vehicle crime is incomparable to anyone else in both [Surrey and Sussex] forces.

“He conducts in-depth, intelligence-led enquiries, often with little or no notice that are then fed into significant investigations resulting in serious disruption of extensive organised crime networks.

“And I can only estimate the value of the stolen and cloned vehicles Geoff has been responsible for recovering, but I believe it to be into the hundreds of thousands of pounds,” said PS Schultze.

When he became aware he had been nominated, PC Newman said: “I certainly don’t do the role for any sort of recognition, but the fact that people have taken the time and effort to put me forward is honestly quite humbling.

“I’m shocked and a little choked to even be considered for this given the amazing roads policing officers that I work with.”

And while PC Newman himself is modest, PS Schultze cannot praise him highly enough, saying: “Geoff has been a key asset in denying criminals the use of the roads locally and nationally.

“His dedication, commitment, enthusiasm and execution of his duty to fight serious organised crime has been exemplary and worthy of this award,” he said.

Other nominees included the Essex Serious Collision Investigation Unit (SICU) for their ‘professionalism, drive and work ethic’, PC Craig Davies from Avon and Somerset for his exceptional work as a Family Liaison Officer, and PC Lou Philips, also from Avon and Somerset, for her work in facilitating a project providing ‘mourning blankets’ as a gesture of support from families who had lost loved ones to those bereaved in the Manchester Arena attack.

Special thanks goes to our award sponsor Irwin Mitchell.