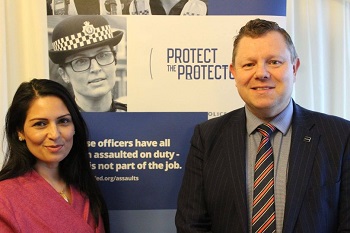 Home Secretary Priti Patel has backed calls by the Federation to share body-worn video footage with the public in a bid to prevent police officers being unfairly criticised.

This follows a rise in popularity of posting selective clips of incidents on social media and concerns raised by the Federation about members being subjected to personal abuse because of one-sided videos.

PFEW National Chair John Apter recently raised this topic with the Home Secretary during an exclusive interview for POLICE mag, when she branded the publicising of unbalanced footage in an attempt to vilify officers as “unacceptable”.

The Home Secretary has now written as a direct result to Mr Hewitt, encouraging Forces to be proactive in considering when BWV footage can be released to demonstrate the good work officers do and to show that selective footage can be misleading.

She said: "It is in this context that I am expressing my support for the Police Federation's recent campaign to protect officers from unfair criticism via social media.”

Mr Apter said: “I have said this time and time again, but the toxification we are seeing, of posting these video clips without a balance, is incredibly damaging.

“I wrote to the National Police Chiefs’ Council and the College of Policing, saying that when appropriate and where it is possible, we should release officers’ body worn video footage. I also raised this directly with the Home Secretary.

“I appreciate we can’t release footage in every circumstance, but if officers are being vilified on social media then there must be balance to protect them and show the full story.

“The Home Secretary’s support and the action being taken by the NPCC and College of Policing is very welcome news. This is a step in the right direction, not only to protect my colleagues from unfair social media attacks, but also to protect public confidence in the police.”

Last month, Mr Apter wrote a letter to the Chair of the National Police Chiefs’ Council, Martin Hewitt, and College Chief Executive Mike Cunningham, asking for an urgent investigation into the situation.

The NPCC and the College have since agreed to begin reviewing BWV guidance with the Federation feeding into the process.