Home Office announces how Taser funding will be allocated 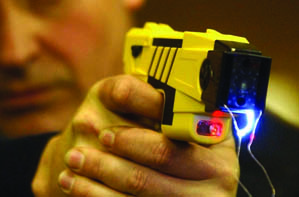 * Please note this article was updated on 2 March 2020 following a correction issued by the Home Office in relation to the total number of Tasers bid for, and allocated to, the Sussex and Surrey forces.

The Home Office has announced how many new Tasers will be made available to forces following its decision to provide £10m of centrally funded money for the vital equipment.

The allocation details follow a bidding process that gave all Police and Crime Commissioners the opportunity to request money from a dedicated, ring-fenced fund.

Of the 43 forces in England and Wales 41 submitted a request to increase the number of Tasers available to officers. The only two who did not seek an uplift were North Yorkshire and Staffordshire, with Surrey and Sussex; and Cambridgeshire, Hertfordshire and Bedfordshire forces submitting joint bids.

The total number or Tasers asked for by PCCs was 8,155 at a cost of £6.7m – a third under the total amount originally budgeted by the Government. The new money is intended to cover until March 2021.

Provision has also been made to support the training of Taser instructors with some £150,000 being allocated for this, with the remainder of the £10m being used to tackle serious violence and county lines drug gangs.

National Chair of the Police Federation of England and Wales John Apter said: “Taser is an essential piece of equipment which has saved many police officers and members of the public from serious injury or worse.

“I have campaigned for ring-fenced funding for more colleagues to have access to Taser and it’s refreshing that the Home Secretary has listened and acted. It’s because of our lobbying that there will be more than 8,000 more Tasers available for my colleagues, this can only be a good thing.

He continued: “This was a unique opportunity for forces to secure extra protections without shouldering the majority of the cost. I would have liked to have seen every penny of the £10m funding used to fund more Tasers. At a time when officer safety is dominating the headlines, I am surprised that some forces chose not to take advantage of this extra funding.”

Making the announcement, Home Secretary Priti Patel said: “Our brave police officers put themselves in harm’s way to protect us all and Taser is an important tactical option in potentially dangerous situations.

“This funding forms part of our commitment to ensure forces have the powers, resources and tools they need to keep themselves and the public safe.”

PFEW has long campaigned for a wider roll-out of Taser with a recent snap-shot poll conducted by PFEW suggesting that  89% of officers would want to routinely carry Taser after being given appropriate training with nearly 97% saying their colleagues should be allowed to carry the devices.

The Home Office’s announcement follows a raft of new policing-related policies which has seen the Government pledge to recruit 20,000 new police officers, review sentencing for those who attack police officers and introduce a Police Covenant.

But the Home Secretary has made it clear that the Government expects to see a return on its investment Speaking at the National Police Chiefs’ Summit this week Ms Patel said she was “unequivocal” in her support for officers but added: “There must be no weak spots… and I will be unapologetic about holding you to account.”

And with the National Police Chiefs’ Council expected to publish its review of Police Officer Safety in the coming weeks – the safety and protection of police officer is likely to remain firmly in the public eye.

The allocation is as follows: