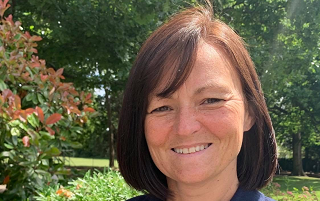 About two years ago Chief Superintendent Rachel Farrell became aware that some officers who had suffered a miscarriage or the loss of a baby, had not had a good experience at work, while others had been treated better. Rachel set up a focus group and invited me to be a part of that group. At the time I was the Equality Lead for Hampshire Police Federation and I had also been key in setting up a maternity support group in force. The group mainly consisted of those with personal experiences, both positive and negative, with the goals of wanting to get people talking about this subject and to educate managers.

In an organisation of about 6,000, and with statistics of one in four pregnancies ending in a loss, we knew that this was affecting a significant number of officers and staff. As we approached National Baby Loss Awareness Week 2018, we visited stations across the force area and spoke to as many teams and departments as we could. We held an event at Netley (our Support HQ), where we were supported by many organisations such as The Miscarriage Association, Tommy’s and The Lullaby Trust. Officers and staff were invited to come and have a chat and could also light a candle and write a message for their baby. We found that it’s not just parents that are affected but wider family members, such as grandparents and siblings.

Our next step was to introduce a force policy to assist managers in supporting officers and staff. The policy gives advice to managers on support that is available and advises on what not to do, such as recording absence as sickness when compassionate leave should be used. It contains several options for signposting to services both within and outside the Constabulary.

We then advertised for Support Contact Officers. We initially recruited eight, with a mixture of male and female police officers and police staff. The group has a range of personal experiences from multiple miscarriage, stillbirth and termination for medical reasons. These officers are assigned to those needing support. Their role is to be a listening ear, to signpost to other services, provide advice to both the person needing support and their line manager, and to challenge their line manager if necessary.

The group has now expanded and is providing support to those undergoing fertility treatments. The force has agreed to give 40 hours’ paid time off per year for treatment. This has made a real difference and means officers don’t have to use their annual leave.

For National Baby Loss Awareness Week this year, we are planting a tree in our garden at Netley to remember all the lost babies and children of our officers and staff.

Thank you to all those who continue to support our group and please remember that your local Fed reps are there for you if you are struggling and need help.