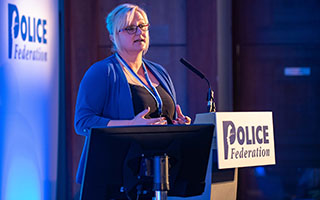 Police officers should be given the wellbeing support and tools they need to do their jobs, so that issues don’t develop into crises. This was the sentiment of a dedicated session on wellbeing at the Police Federation of England and Wales’ (PFEW) seminar on Post incident Procedures (PIPs).

Hayley Aley, PFEW’s lead on wellbeing, expressed hope that we could get to a point where being in the police did not have any detrimental effect on an officer’s physical or mental health.

It was also recognised that officers would need different levels of support at different stages in their lives and careers- with PFEW’s ongoing Menopause campaign highlighted, alongside new guidance on fatigue, making healthy snacks available in police stations, and acting against assaults on officers.

Services provided by third parties were also discussed, including Inner Armour (which equips officers with psychological tools to protect themselves), and is currently being trialled by several forces.