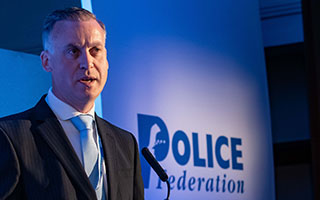 Open ended investigations into police officers are having a “massive impact” on their mental health and wellbeing, the Post Incident Procedures Seminar heard.

Delegates were hearing from Phill Matthews, Conduct and Performance Lead for the Police Federation of England and Wales (PFEW), on the need for a statutory time limit on such investigations, as well as new powers for Police and Crime Commissioners to review or halt prosecutions.

Making the case for ‘Time Limits’, a new Federation national campaign, Mr Matthews said: “There’s absolutely no time limit on when a complaint can be made, or to say how long the appropriate authority can take to investigate.” He used the analogy of a police officer stopping a motorist for speeding. “That officer has six months to prosecute – but if the motorist complained about the officer there’s no limit to how long it can take for that complaint to work its way through the system and that’s got to be wrong.”

He said investigating authorities such as the Independent Office for Police Conduct (IOPC) and the Professional Standards Departments (PSDs) in forces, “hold all the cards” and are reluctant to see those powers curbed. However, the Police Federation will be lobbying Parliament for a change in the law to apply a 12-month time limit for prosecutions into police officers, with appropriate safeguards.

Mr Matthews told the seminar: “We are talking about things that can potentially lose officers their jobs – that’s the top end but usually matters are less serious – and they take years and years to resolve.” At the same seminar delegates heard from Andy Birks, a former Metropolitan Police officer, who was investigated for a decade and prevented from retiring, before being exonerated.

Freedom of Information requests by the BBC found that the IOPC and some forces were taking more than a year to investigate officers. Two thirds of IOPC cases are never proven and the cost to the taxpayer for officer wages while suspended, was £13m from 29 forces.

Mr Matthews continued: “We think a 12-month time limit on prosecutions is reasonable and we want to get that into statute, and to back that up we want to give Police and Crime Commissioners (PCCs) and even legally qualified Chairs powers to demand progress, or put a stop to prosecutions if they drag on longer than that. Part of that is to enable the speeding and simplification of the appeals process which is often what causes some of the timeliness in a lot of these cases.”

The seminar also saw a preview of a video featuring a Metropolitan Police firearms officer who was prosecuted and taken to a misconduct hearing over two years, in a case of mistaken identity.

More on this campaign coming soon.