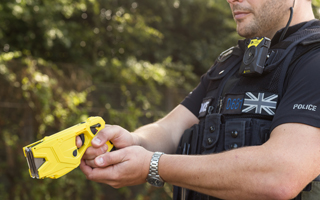 After months of campaigning by the Federation, chiefs now have the ring-fenced funding needed for a wider roll-out of Taser.

Responding to the news, National Chair of the Police Federation of England and Wales John Apter said: "I have been campaigning tirelessly for many months for Taser to be funded centrally so this is a significant win for us and our members.

"The Home Secretary recently said that her top priority is the safety of police officers, so it is heartening to know our call for ring-fenced funding for Taser has been heard and I welcome such positive and decisive action."

The ring-fenced funding could mean more than 10,000 further police officers in England and Wales will be able to carry the devices to help protect themselves and the public from harm.

Mr Apter continued: "Officers are telling me daily they are feeling vulnerable and often isolated due to the lack of this vital protective equipment which has saved the lives and prevented serious injuries; this is why I felt so strongly that all officers who want to be trained and carry Taser should be able to.

"The Home Secretary has listened and she has acted, this is absolutely the right decision for my members and for policing.

"Chief officers now have ring-fenced funding available to ensure their officers and the communities they serve are safer," he concluded.

Home Secretary Priti Patel said: "I’ve been completely appalled by the recent spate of serious assaults on police officers, which is why I’m giving chief constables the resources to dramatically increase the number of their officers who carry tasers.

"They keep us safe and now I’m giving them what they need to keep themselves safe on the job."

A recent Police Federation of England and Wales survey found 94% of officers think Tasers should be issued to more frontline staff.