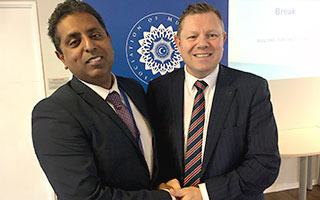 The Federation’s National Chair has spoken at the Association of Muslim Police (AMP) annual meeting to welcome the prospect of closer working between the organisations.

John Apter was among a host of high-profile guest speakers at the event in London on Tuesday, including Metropolitan Police Counter Terrorism Chief Neil Basu, Commander Bas Javid (brother of the Chancellor of the Exchequer) and Deputy Chief Constable Phil Cain.

Mr Apter spoke about his role and why he became a Federation representative – he had been wrongly accused of crime and arrested by his force’s Professional Standards Department (PSD). Though he was eventually exonerated he had considered resigning from policing.

“I wanted to clear my name, get an apology and leave – I couldn’t be part of something that had treated me so badly,” he said. “My Federation rep, who had stood by me through thick and thin, even when friends had dropped me, urged me to stay and become a Fed rep.”

Mr Apter contrasted the experience with that of black, Asian and minority ethnic (BAME) officers, many of whom have been treated unfairly in their forces, “not because of something you’ve done, but for who you are”. He told the audience: “I cannot experience what some of you have, but by working with groups such as the AMP we can help ensure our reps are as informed as possible.”

Metropolitan Police-based AMP is part of the Police Association of Strategic Leaders (PASL) group, consisting of the National Association of Muslim Police and other faith, sexuality, disability and gender support groups, which met regularly with the Federation to share their perspectives and work collectively in the interests of their members.

Deputy Chief Constable Phil Cain, the Race, Religion and Belief Lead on the National Police Chiefs’ Council (NPCC), said BAME officers are three times more likely to be dismissed from the police service. He told the story of a black officer – one of 150 BAME officers and staff the NPCC has interviewed – who was subject to three gross misconduct investigations in as many years.

DCC Neil Basu, the country’s most senior BAME officer, spoke about his own encounters with racism. At age 11 he had been beaten and stuffed into a school locker. He grew up at the time of the National Front where casual racism was rife but benefitted from “brilliant parents” who taught him to work harder and be smarter to get on. However, the DCC added: “The most important thing for me is building a police service that looks like the community it serves.”

Metropolitan Police Commander Bas Javid urged listeners to be resilient, develop support networks, get out of your comfort zone and don’t be afraid to challenge the status quo.