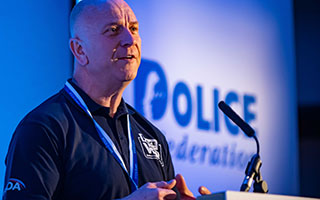 The virtues of the Welfare Support Programme (WSP) were extolled by Mark Williams, chief executive officer of the Police Firearms Officers’ Association (PFOA), who provides this vital service, supported by the PFEW.

Officers are referred to WSP through the Federation when facing the “most serious consequences of policing” – being suspended from duty, facing gross misconduct and considered at risk or vulnerable. Most of WSP’s activity is pro-active calls to officers, as well as being at the end of the phone when officers get in touch.

Mr Williams said: “When an officer gets a call from the WSP, they feel like someone cares about them. 54% of people who use WSP are vulnerable and at risk.” In most cases involving a death or serious injury following police contact, he continued: “officers are less worried about the incident itself, as they usually believe they have done nothing wrong, but what really concerns them is the investigation – we still hear nightmare stories of over-zealousness and lack of common sense.”

Mr Williams talked about why the WSP came into being – following the suicides of three firearms officers in 2012, using their own weapons. “I thought, if there was a number they could have called and someone they could speak to, would that have made the difference?”

Looking ahead, WSP is to receive increased funding from PFEW and the PFOA, in order to provide a national counselling service, with practitioners trained in neuro linguistic programming (NLP) to help officers who experience mental trauma.

Mr Williams acknowledged the toll that helping colleagues in their time of need can take on Police Federation representatives themselves. “I’ve seen friends have nervous breakdowns and marriages fail, so we will provide an NLP coach at the end of a phoneline, 24-7 for Federation reps.”