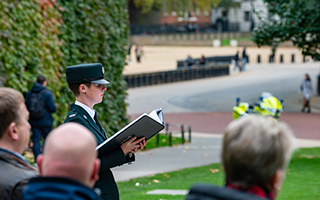 The event, which took place at the National Police Memorial in The Mall in London, was attended by Geraldine Winner – the wife of the late Michael Winner who established the Police Memorial Trust in 1984 – as well as representatives from policing from across the UK.

Police Federation of England and Wales National Chair John Apter, who read the police oath during the ceremony, said: "It was an honour to have been able to take part in such a special event and to be asked to read the attestation that every constable across England and Wales makes before starting their police service."

The new roll of honour, which takes pride of place at the Memorial, commemorates almost 5,000 police officers who have lost their lives.

The latest version was signed by Prince Charles when he attended the National Police Memorial Day ceremony in Glasgow at the end of September.

Mr Apter continued: "This serves as a permanent reminder that we will never forget our fallen colleagues and their service. And I am so pleased that his Royal Highness the Prince of Wales chose to personally sign this copy. It is testament to the regard and respect in which it is held."

The roll, which is in the form of a book, was presented to Mrs Winner on behalf of the Police Memorial Trust by the Police Roll of Honour Trust and will be on permanent display at the memorial in The Mall.

Every day the page of the book is turned to display the names of the police officers who lost their lives on that date.

Mr Apter concluded: "Policing is a family and, like any family, when we lose one of our own we all feel the pain. This memorial is a moving and fitting tribute to my brothers and sisters who have lost their lives, and the Police Federation is proud to be involved in ensuring it remains a permanent tribute to them."

The Reverend Canon David Wilbraham, National Police Chaplain and co-ordinator of National Police Memorial Day also took part in the service reading the names of the officers on the roll who had lost their lives on this day in the past.

He said: "For the families, friends and colleagues of those who are commemorated their death is not just a historic event it remains a present reality. And the Roll of Honour and National Police Memorial Day allow us to acknowledge the timeless commitment and loss of those who gave all to protect the Queen’s peace."