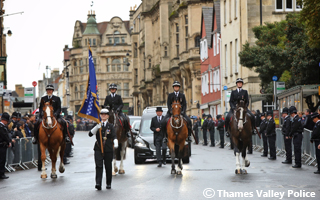 The policing family and the public came together today at the funeral of 28-year-old PC Andrew Harper who was killed on duty.

Hundreds of people attended the service which was held at Christ Church Cathedral in Oxford this morning (14 October).

PC Harper’s wife Lissie and his wider family were joined by his colleagues from Thames Valley Police as well as officers from around the country.

The processional route was also lined with uniformed officers from other forces and flags across the Thames Valley Police area, and those on many other police buildings around the country, were lowered to half-mast as a mark of respect to the fallen officer.

National Chair of the Police Federation of England and Wales, John Apter, who attended the service on behalf of the Federation’s 120,000 members, said: “I was honoured and humbled to have been at PC Harper’s funeral together with colleagues from Thames Valley and across the country. And to have been able to pay my respects and celebrate this officer’s life which was cut short in such a brutal way.

“It was an emotional and poignant service which will stay with me for a long time. It was also a sobering reminder of the dangers police officers face every day – and that on some tragic occasions they make the ultimate sacrifice.

“My thoughts, as they so often have been since this terrible incident, are with PC Harper’s wife, his family, his friends and colleagues on this most moving of days,” Mr Apter concluded.

Thames Valley Police Federation Chair Craig O’Leary, who was also at the ceremony said: “It is our sad duty today to pay our last respects to Andrew and support his wife Lissie, his family and his friends at his funeral. Every day Police officers go to work to fight crime and protect the public and PC Andrew Harper loved being a police officer. Sadly, on very rare occasions a colleague makes the ultimate sacrifice. We will ensure that heroism is never forgotten.

“And that is what Andrew was. A hero. Loved by his family. Loved by his friends. And loved by his colleagues. He of course remains much missed and it goes without saying that this has been a terribly tough time for Andrew’s colleagues and the whole force – having to carry on policing the Thames Valley area while mourning the death of a colleague.

“This has really hit us all hard and shocked everyone in the whole police service. But we are supporting each other as best we can.

“The support we have received from the police family and the public in the UK - and indeed across the world - has been overwhelming. And that has once again been evidenced today with the public and colleagues attending from across the country.

“On behalf of all my colleagues in Thames Valley Police, I’d like to express my gratitude for that continuing support, the donations to Andrew’s Memorial Fund and the many messages of condolence,” Mr O’Leary concluded.

PC Harper’s family has asked for donations to be made to the Tiggywinkles Wildlife Hospital in Haddenham, or the Blue Cross re-homing centre in Lewknor.

Messages of condolence to his family can be made by emailing PCAndrewHarperCondolences@thamesvalley.pnn.police.uk.

PC Harper died on duty on August 15 after responding to a report of a burglary. Four people have been charged with offences linked to the incident.