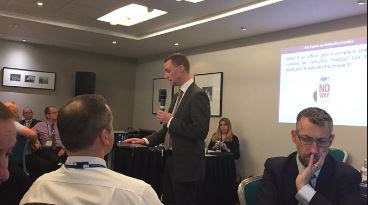 Chiefs and senior officers must get behind new performance and conduct regulations to move away from blame culture and towards learning and improvement, the Home Office says.

At today’s (29 October) Federation Conduct and Performance Liaison Officers’ Seminar in Liverpool, Ian Balbi and Gary Watson from the Home Office’s Police Integrity Unit highlighted what officers can expect from new regulations ahead of an official launch in December.

One of the key points includes a move towards Reflective Practice – where the misconduct threshold will be raised.

Mr Watson told delegates the current system was not in anyone’s interest and was too adversarial for low-level matters. He said this prompted the need for a change in culture whereby supervisors can feel more confident to deal with cases outside of the misconduct arena.

He added all parties must be on board with these changes for it to make a real difference, so the disciplinary culture does not creep back in again.

The issue of protracted investigations was also raised where the Home Office stated it is working on ensuring timeliness is improved in the future.

Police and crime commissioners will be able to hold the IOPC and force Appropriate Authorities to account, like how they hold chiefs to account, if they fail to complete an investigation within 12 months, says Mr Balbi, being able to “name and shame” if they’re not complying.

However, Phill Matthews, Federation conduct and performance lead, spearheading the Time Limits campaign, called for stronger penalties to be in place.

He said: “There has been a step in the right direction, but there has been years and years of embarrassing moments. Our aim is not to have investigators dismissed for poorly carried out and slow investigations, we would much rather create better incentive to improve the quality and speed for our members - this requires some form of sanctions and teeth to rectify investigations early on.

“Without the teeth, it doesn’t change decisions; we need something to hold them to account because embarrassment does not work – we have been trying this tactic for years with little effect. A 12-month time limit is needed to focus resourcing.”

The new regulations will land in December and we will update members on these changes when they come into force in February.