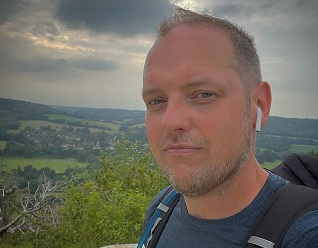 Ian Feasey is the Facilities Manager at our headquarters in Leatherhead. He has worked for the Police Federation of England and Wales for 14 years. In Mental Health Awareness Week, Ian honestly opens up on his battle with anxiety in the hope it may help someone suffering in silence in the same way.

I have been a very anxious person from my teenage years until now - my 43rd. I knew there was a problem when I use to feel scared to go out to the pub with my friends in my late teens.

I used to worry about my friends dying on a night out, or my family dying while I was out. I would have panic attacks a lot and hide myself away and make any excuse I could to not be sociable. I have lost a lot of friends over the years because I simply did not see them anymore.

In my early 20s it was just easier for me to be on my own and not have people to worry about. I was quite isolated and lonely. I tried to talk to my friends and family about how I was feeling but was always told I was a hypochondriac or a wimp. I knew there was something wrong but ended up just keeping it to myself as I did not want people to judge me.

The problem with anxiety is that it is invisible. I put on a brave face and tried to deal with my worries inside while smiling on the outside. I got on with things in that way for 10 years. I took on more and more worry. I would have panic attacks regularly and my heart would be racing a lot of the time. I felt fear daily, and I would have lots and lots of unwanted thoughts of people dying. I would always fear the worst a lot of the time.

Life was hard mentally. Every good or fun time I had would be ruined by me thinking how it would all go wrong eventually. I had some brilliant times when I wasn’t feeling too anxious. But it never left me. I met my wife and things settled down. I had something to focus on and being with her made me feel I had a purpose, and I could see a future that wasn’t doom and gloom.

In 2012 things changed massively. My cousin Nick was killed in a car crash in Iraq. He was a private security guard. Nick was a massive part of our family. We are all really close, so his death was a huge shock and massive loss for us all. We all pulled together, and I never really thought about how it affected me.

Later that year my son Robin was born. We named him Robin Nicholas after my cousin. I absolutely love being a dad, but those first few years were hard mentally for both me and my wife. I worried about him from day one. I did not sleep for the first two weeks of his life as I was certain he was going to die in his cot if I did not watch him all night.

When Robin was three years old, we were woken up one night to a horrible choking noise. We went into Robin’s room, and he was pale and gasping for air.

We rushed him to hospital where we were told he was having an asthma attack. We watched as the doctors rushed around getting all the equipment ready while he lay there looking grey. There was nothing me and my wife could do. everything was in slow motion. It was the most fear I have ever felt. He made a full recovery but would be hospitalised a further 10 times before he turned four.

In 2016, I was driving home from my friends when I saw a person waving in the road. I could see a motorbike and a car had collided. I saw the motorcyclist laying in the road so I got out of my car to see if I could help. As I got closer, I could see that this poor guy had lost his leg and there were pieces of skin and blood all over the road. The driver of the car had called 999.

He was stuttering and crying. I grabbed the phone off him and my first aid training kicked in. I grabbed a blanket from the car and used it to pack the stump where his leg once was. I then did CPR for eight minutes until the ambulance arrived. I was happy that I gave him a shockable rhythm. But was told 30 mins later that he had died. I had no emotion attached to that time. I still don’t.

Over the months that followed I became more and more withdrawn from life. I would spend hours at a time staring out of the window thinking about what would happen if I died or if anyone I loved died. I would have graphic dreams of my children dying in the worst possible ways.

I used to talk to one of my best mates Elaine who use to be the head housekeeper here at HQ. I worked with her for nine years. She was always here for me, and I would tell her how I was feeling regularly. Elaine, her husband Pat and son Ben became close friends of mine and my wife’s. I’m still good friends with both Ben and Pat now days. Elaine told me she had terminal cancer. This affected me deeply. It was like my mind was right all along… everything will go wrong.

I fell into a period of just existing. I was no longer living my life. I was having so many unwanted thoughts that I just became numb to them and any feelings. I was just passive, a spare part in groups. I would laugh along and smile, but inside there was nothing but fear and absolute darkness. I wanted to just be on my own. I stopped talking to Elaine as I knew she had way more on her plate than I did.

One Sunday we had family over for a barbecue. I felt like a third person looking at myself. People were talking to me, but I could just hear voices like I was in a huge crowd I could not make anything out. I went to the toilet and sat on the edge of the bath and just cried. It was at this point, my absolute lowest, that I decided I must get help. That night I let it all out on my wife. She sat and listened but I’m pretty sure she felt scared. I am her husband, she hated seeing me like that. In so much pain.

I spoke to my GP, and they referred me to a CBT therapist. I had 10 sessions of CBT and it completely changed my life. It was hard at first having to face my own mind and challenging my thoughts. There were lots of shaky days and tears for no reason at random points in the day. But eventually I got to grips with it. I practiced exercises and techniques and slowly I started to find myself again. I was diagnosed with General Anxiety Disorder (GAD). It will never leave me, but I learnt enough to help myself and to keep improving.

Elaine died in 2017. Three weeks before my daughter Molly was born. We named her Molly Elaine. Elaine’s passing affected me deeply. I talked a lot more after she died. I wanted people to know I was hurting but I was okay. I also wanted to be that ear for others. I understood the value in talking.

As time went by, I started channelling my energy into my family life, work and friendships. The unwanted thoughts started to become less frequent, and I began to sleep so much better with the help of sleep hypnosis apps. My anxiety is still there, however, and if I don’t look after myself in the right way it takes hold very quickly and can be very destructive.

My last bout of anxiety was in February of this year. I have known for a while that drinking alcohol has an affect on my anxiety. I have found it harder and harder to keep anxiety at bay after a drink. If it was just a hangover, I would be fine. But two days after drinking I start to get unwanted thoughts and the darkness returns to my mind. It started happening after one beer! I would have a beer and two days later I would feel worried about something or feel disconnected.

In February I went out. Had a few too many drinks. The next day I felt rough. Standard hangover. Monday morning came and I woke up worrying about Robin Dying. I put it out of my head but had a knot in my stomach all the way to work. I walked into the office and said hi to my assistant Chris. He asked me if I was ok… my mind was having thought after thought about death, my kids, my wife, my family, one thought after another. I went to the toilet and was sick. My thought was to just get home and lock myself away.

I told Chris I was sick and told him it must be a bug. I was sick again on the way home. I got through my front door at 10am, had a shower and got into bed. I switched my phone off and I lay there for a good two hours not being able to control my thoughts. All sorts rushing through my mind. I fell asleep and had the worst dreams I have ever had. I was in and out of sleep, Sarah checking on me, until woke up at 9pm.

Thoughts still rushing through my mind I fell asleep again. I was dreaming in black and white… eventually the blackness was all I could see with the echoes of my kids talking. I woke up the next morning and the house was empty. It was 10am. I felt exhausted and did not know what day it was. Slowly through the day I regained control of my thoughts. I spoke to Sarah and told her what had happened.

From that day I have given up drinking. I have put it on the list of triggers, and I feel better than ever to be honest. I am also exercising regularly and getting more sleep. I feel that alcohol has been a major part of my anxiety over the last 25 years. If I really think about it used to drink regularly. Not excessively and not to the extent that I had a drink problem, but it used to coincide with anxiety.

I am proud of how far I have come. I am far happier than I have ever been now days. I cannot stress enough how talking is a huge key to turning a corner with mental health. I except I will have wobbles now and then, but I hope these become fewer as I continue to learn about my mind and this condition.

I always say I want to turn my negative experience into a positive. We are all different and have our own issues from time to time. Having a mental health condition is not something to hide. I will always be a listening ear for anybody. I don’t like the thought of people struggling mentally. There is a life to live.