Pride month takes place in June to honour the anniversary of the Stonewall uprising - a key event that laid the foundation for LGBTQ+ rights and future events. Pride is about acceptance, equality and celebrating differences.

The Police Federation of England and Wales’s very own LGBTQ+ Equality Group was set up in 2020, to bring together Federation Reps from all 43 forces who identify as LGBTQ+. 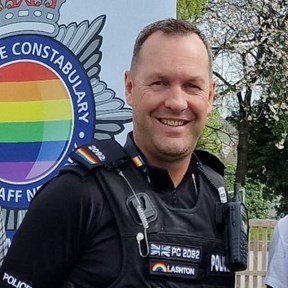 As part of Pride month, Chair of the LGBTQ+ group Ian Ashton provides an insight into some of the work being undertaken and the importance of having a support system in place for LGBTQ+ colleagues. The group has already held two CPD events specifically for our LGBTQ+ Fed Reps and they are looking to host a further event for allies this year. Ian feels that being Chair of the group gives him a voice within the National Board and an opportunity to shape the way that the LGBTQ+ community is represented within PFEW.

Ian says: “Our main aim as a group is to create an environment that is equality aware and fully inclusive, to have a fully representative and diverse PFEW. We want to create networking opportunities within PFEW for those who identify as LGBTQ+ and to support our reps with progression opportunities. A critical friend, we will identify concerns and raise these with the appropriate post holders and the National Equality Lead.

“The group wants to bring together our reps who identify as LGBTQ+ and our allies, who are extremely important. Sharing ideas and shaping the future of PFEW is vital and, as a group, we have this opportunity. We want to be a source of reference for reps and for our members and to encourage PFEW to consider all its diverse reps when making decisions.

“We want to provide a voice to all of our LGBTQ+ colleagues and to ensure that we are there for one another.”

Ian is extremely passionate about equality, in particular sexual orientation, gender identity and disability. Initially married to a female colleague, Ian came out as gay later in life.

“Like many in my position, I took a certain path - not one I regret but probably one that I felt I had to take to fit in, especially in the 90s when being different wasn’t really accepted. After our son was born, he was diagnosed with a rare life-shortening condition, and we were told he had 18 months at most to live.

“This certainly put a different perspective on things and over the coming years life became more difficult and gradually we drifted apart but remained good friends for the sake of Oliver. It was about this time that I decided to be true to myself. I needed to do this for my own mental health but also to ensure Oliver could have the best quality of life. I decided to ‘come out’.

“It was a difficult time for me but I just knew that I didn’t want anyone else to be feel the way I was, so I took a decision to overcome my struggle and chose to focus on making a difference and ensuring no one else ended up like me with only a secret group for solace.

“15 years later, a new partner Andy, a number of Pride events attended, rainbow cars, rainbow epaulettes and Stonewall recognition has shown we can in fact be ourselves - its great! And we aren’t done yet!

“We will work together to make a difference and change the face of our Federation so that it is inclusive and represents our members.”