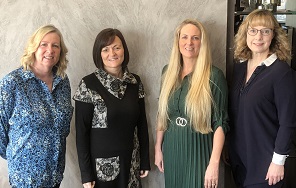 The theme for International Women’s Day this year is ‘Breaking the Bias.’ But what does this mean? Our PFEW Women’s Group speak about the bias that they have experienced during their respective careers in policing, and what they think are the key factors to making necessary changes in the fight for equality. Collectively we can all #BreakTheBias.

We all have a certain amount of bias and this informs our perceptions going forward in life. Historically, police officers were perceived to be men and it was seen as a ‘manly’ job. Women are still underrepresented in many areas of policing today.

I joined policing when I was 32 years old, which seemed old. I was a single parent and I struggled like many others both before and after me. Looking back, the comments that were made to me about my age and the fact that I was single with a child, were outrageous but I just went along with it and laughed it off.

It is going to take time to break the bias around misogyny and sexism, and there absolutely needs to be a culture change within policing. But for this to happen, we must start talking about the issue and what changes we can all work together to make. In order to break the bias, you have to recognise the bias first and then challenge any unacceptable behaviour or language.

It is a tough challenge and we all, PFEW as an organisation included, have lots to do. But if we are alive to the facts then we can start making changes.

I have lost count of the number of times I have been called a ‘policeman’ or a ‘policeman lady’ over my 27 years in policing. I have also been referred to as a ‘lumpy jumper’ and ‘Tampax commando’. I have been in many meetings and training sessions where the speaker refers to the audience as ‘men’ or ‘chaps’. Since becoming the first female chair of Hampshire Police Federation, I have been referred to as a ‘Chairman’ by many.

Will we ever eradicate this type of language? Only if we educate each other. Education is the key to breaking the bias. Everyone should feel that they can challenge when non-inclusionary language is used. Some don’t even realise they are doing it.

Fortunately, policing has come a long way in terms of gender equality. The number of women joining the police has risen around 10% over the last 30 years; more women are being promoted into higher ranks and being successful in applying for specialist roles. However, there is still a long way to go. We still see some officers with misogynistic views and attitudes. We need to call these people out if we ever want to get to a place of true gender equality and to break the bias.

‘Rottweiler, man hater, difficult, aggressive’ – just a few of the names I have been called in my 32 years of service. I have lost count of the number of times I have picked up the phone in the Duty Inspector’s office to be greeted with surprise that a woman had answered before the caller asks to speak to the Inspector. I still receive emails addressing me as ‘Sir’, assuming that Inspector Sam Hawkins is a man.

My experiences as a female officer in a male dominated environment are a huge part of why I became a Fed Rep. Looking back, it’s great to see that policing’s inclusion, integration and value of women has improved – but there is more to do.

As part of the PFEW Women’s Group and as a branch secretary, I am passionate about breaking the bias. In my view, raising awareness so that we can first all acknowledge our biases is key. We all do it sometimes, but self-awareness and empowering our colleagues to challenge us when we do, will help hugely.

it is easy to say ‘equality’, but it’s so much harder to demonstrate it. But I am confident we can all play our part to do it.

With 25 years’ service, I can honestly say that I have seen massive improvement in gender equality within policing. There is, however, a large cultural hurdle to jump. It’s about having the right people in the right job with the right skills, no matter their sex. We all need to challenge unconscious bias and educate those around us on it.

In my experience, those of us in a minority group just want to ‘fit in’; we don’t want to make a fuss. But I know that we must make a difference and it’s not good enough to accept things can’t or won’t change for the better.

Being a bystander to behaviour that is potential bias is not acceptable. It’s incumbent on all of us to recognise equality, diversity and inclusion – it is everyone’s responsibility. Not only will this improve the culture and working environment within forces, but it will be the catalyst for fair representation across policing. After all, ‘the police are the public and the public are the police’.