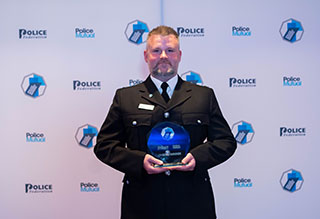 Off duty Police Constable Steven Denniss has won the prestigious overall national award at the Police Bravery Awards 2022. The awards ceremony was held in London on 14 July 2022 in front of an audience including Rt Hon Yvette Cooper MP, Paul Fotheringham, President of the Police Superintendents Association, Tom Pursglove MP, and Andy Marsh, CEO, College of Policing.

PC Steven Denniss was walking his dogs, when he saw a man standing next to a bench in a hooded top staring at a member of the public.

PC Denniss immediately realised this man was wanted for the murder of a young woman and her son the evening before. Both had sadly succumbed to their injuries after receiving multiple stab wounds at their home.

The off-duty officer let go of his dogs’ leads and approached the individual, who responded by attacking him.

The suspect ran and PC Denniss chased him, calling an on-duty colleague for back-up at the same time.

The individual turned back on PC Denniss as he was making ground, pulled out a knife and demanded his phone.

As the two men were facing off, the suspect stabbed PC Denniss in the leg.

Despite his injury, PC Denniss continued to chase the individual as he ran again before other officers arrived and were guided towards their colleague’s location.

He then assisted in clearing the public from the area for their safety whilst the suspect was arrested.

The individual received 40 years for the double murder and 21 months for the assault on PC Denniss.

Hon Mr. Justice Pepperall publicly commended the officer: "I commend PC Steven Denniss for his bravery in seeking to make an arrest while off duty and without any backup or regard for his own safety in order to protect members of the public."

Helen Stamp, Chair of Lincolnshire Police Federation, said: “PC Denniss’ actions demonstrate that he showed tremendous courage in tackling a man whom he knew had committed such atrocious crimes, putting the safety of the public before himself. Thankfully he was not seriously injured but he certainly went beyond the duties expected of him.”

Upon winning the award, PC Denniss said, “It is an amazing feeling now it has sunk in. We cannot forget all those people in the room tonight.

"People who have done some truly brave and outstanding things."

The regional winners are:

Region 6 winner – Avon and Somerset: Officers do not wish to be named

Prime Minister Boris Johnson said: “These acts of bravery, honoured here today by your colleagues and the public, are outstanding and in the finest traditions of policing. I salute each and every one of the fantastic nominees at the awards. You are truly the best of the very best.

“It is absolutely right and proper that we honour and celebrate the work of our brave men and women in uniform who work day in and day out to protect the public.

The progress we are making towards recruiting 20,000 more officers gives me full confidence that together we will make our streets safer. From the bottom of my heart, thank you.”