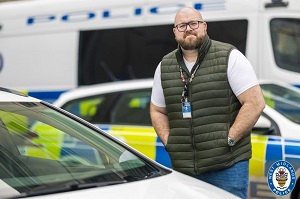 An off-duty West Midlands Police officer, who tackled a man armed with a knife after he stabbed an individual outside school gates, has been nominated for the 2022 Police Bravery Awards.

Detective Constable Mark Bates was quick to respond when two men and a woman, who were drinking alcohol and smoking cannabis, started abusing parents as they waited for their children outside a school last year.

A man approached the group to ask them to stop but he was attacked by one of the group who stabbed him in the arm before running off.

DC Bates and the injured victim gave chase and caught up with the attacker with the officer disarming him and pinning him down until back-up arrived from officers from Warwickshire Police.

He then went in search of the other man and woman who had been causing trouble at the school gates and, after a brief chase, detained and disarmed the other male suspect who was also found to be in possession of a knife.

West Midlands Police Federation secretary Tim Rogers said: “Mark has played down his role in this incident but the fact is his brave actions could well have prevented loss of life or serious injury to members of the public.

“He didn’t think twice about intervening and tackling a man armed with a knife and in doing so showed great courage and determination.

The attacker was jailed for two years and three months after admitting wounding and possession of a knife at Warwick Crown Court.