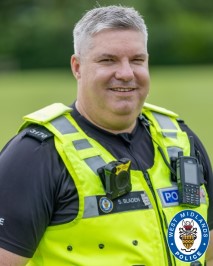 A Special Constable and a Domestic Abuse Strategic Officer were among those receiving prestigious awards in the Queen’s Birthday honours list released earlier today (11 June 2021).

The Queen’s Policing Medal was awarded to 18 police officers in the UK, four of which were of Federated rank: Stewart Bladen, Christopher Madden, Meldin Thomas and Susan Thurley.

He added: "There is no greater honour than receiving such recognition from her Majesty the Queen. Police officers do not do what they do for the thanks, but to receive such an honour is something every recipient should be incredibly proud of. I pass on my congratulations to all colleagues who have received recognition, you should be incredibly proud of this achievement.”

PC Stewart Bladen, who received the medal for his work in football policing and setting up education and rehabilitation for offenders, said: “I honestly didn’t believe it until the Chief’s secretary confirmed it the next day. I’m humbled and embarrassed – but it’s the best thing that’s happened in my career.

“This award isn’t just something for me. It’s a recognition for my team, too, which is the best football policing team in the country.”

Ken Iredale, a Special Constable who serves as Chief Officer for Surrey with responsibility for more than 130 volunteer officers – a role he manages on top of his paid job as a pilot – was named Medallist of the Order of the British Empire.

Speaking about his award, Ken said: “I am humbled to have been individually nominated for this honour, especially as I work with an amazing group of people who inspire me by the enthusiasm and teamwork they show every day.

“At the last count, officers in the Surrey Special Constabulary had contributed an incredible 57,000 hours since the first lockdown - both out on the frontline across many areas and teams, and behind the scenes. I can’t thank them enough for their hard work and this recognition is really for all of them and the dedication they have shown, and continue to show, during these challenging times.”

Members of the order of the British Empire

Medallists of the order of the British Empire