Myth of degrees is ‘dangerous’ and can hurt recruitment 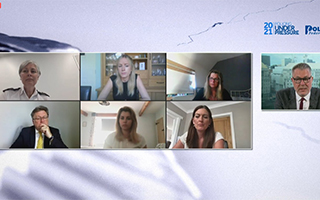 The senior Metropolitan Police officer responsible for training in the UK’s biggest force has claimed the ‘myth’ that new recruits need degrees is dangerous and “demonstrably false.”

Assistant Commissioner Helen Ball told a panel of specialists today during a police recruitment session at PFEW’s Virtual Annual Conference that the often-repeated allegation could impact negatively on some talented individuals who were considering entering the service.

AC Ball said she was “proud to be the person” accountable for training in the Met. She added: “Policing has been extraordinarily brilliant through the pandemic – particularly our recruits who have come into an uncertain world.

“We’ve kept the show on the road during the biggest transformation in recruit training in years. We have transformed our learning in the initial stages and invested in tutor constables.”

When faced with an online question from an experienced officer who claimed there is a perception that police officers need a degree to join, AC Bell was adamant this was simply untrue.

Pointing out there were alternative, supported part-time options available to those considering a career in policing, she responded: “It is demonstrably false, and it’s dangerous if that myth carries on.”

The Open University’s Emma Williams said she did not think the implementation of Tutor Constables had been consistent across the country. She said: “The key role is absolutely vital for new recruits. I think the problem is there is some inconsistency in how the curriculum is being developed.

“Anecdotally, there are some areas doing this very well with blended learning processes and others who teach a very academic approach in the classroom.”

Jo Noakes from the College of Policing added that the pandemic had brought about a new way of training recruits and laid the groundwork for positive changes.

She said: “We’ve seen - sometimes through necessity - you can get really great innovations. We went from face to face to online in a six week period. The innovations led to some great things happening across the service – but, without doubt, bringing in 20,000 officers brings a number of challenges.”

PFEW’s Gemma Fox reiterated that the Fed would support anyone from any background should they wish to join the service.

But she added: “I think we have to understand the long-term effectiveness of online learning with a meaningful evaluation of the training. We don’t want it to become an efficiency tool to save money for forces.

“At the Fed, we are always asking for evaluation. We need to understand the effects of online learning and to make sure officers have the right skills for the rest of their career.”

“We’ve had to adapt – from very hands on, to online and virtual recruitment.

“What’s been a challenge has also been an opportunity. It’s fantastic we have been supported by the Federation and others, so we can tackle some of the barriers.”

PFEW’s Dave Bamber said only time would tell if the recruitment process was a success and said: “Has virtual meant members have been mearly taught things and have not quite developed? Only time will tell.

“If that is the case, it isn’t the officers’ fault - and it should be acknowledged as that.”