Blog: Hard work behind the scenes

Once again the President of the United States of America is in the UK and his State visit is attracting wall to wall media coverage as it did last time he was here just 11 months ago. And those watching around the world will see very best Britain has to offer in terms of pomp and ceremony. But what they will also see if they look a little more closely is thousands of police officers – quietly and unceremoniously getting on with their business of protecting the President and the public. 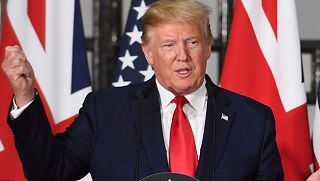 Now we all remember what happens when the provisions made for officers policing these events fall short. Last year’s visit showed us that. But it also showed what great work the Federation can do in such circumstances.

Mr Trump’s last visit to the UK taught operational planners some valuable lessons and we have worked tirelessly with forces to improve the working conditions for all officers providing aid this year. Sudden alterations to the President’s plans last time meant - although an immense amount of work went into operational measures - forces were required to allocate more officers to Essex last minute due to a potential threat at Stanstead Airport.

Accommodation had to be sought quickly by the force which the Army helped with, but which left officers on camp beds in a gym hall which did not meet ours, or the force’s expectations. As soon as we became aware of the issue calls were made to the right people and before lunch time the next day it had all been resolved and officers were accommodated in hotels instead. So this year we have made sure those lessons were learnt by the operational commanders.

As the President’s focus moves away from the capital and toward the South Coast and Portsmouth where he will take part in the commemoration of the 75th Anniversary of D-day, our welfare focus shifts from our Met members to our colleagues in Hampshire.

Prior to the event the operational plan had suggested the use of dormitory-style rooms and shared facilities. Now if you have been on your feet for hours the last thing you want is to have your well-earned rest disturbed by your teammates snoring – not matter how well you get on!

It was not a suitable option so we made contact to highlight our concerns and now each officer will be put up in hotel accommodation rather than those barracks. We have also ensured all officers will receive their £50 overnight allowance, an important recognition of those officers having left family behind, often incurring costs in doing so, to undertake this operation.

The Fed has also deployed ‘welfare wagons’ to the area, which will play an important role in making sure the needs of officers are met. I know what it’s like to be out on the frontline and at times it can be really challenging, having to stand on a cordon in the blazing heat or freezing rain.

We wanted to make this operation more comfortable for our members so have organised these specialised vehicles which will be doing the rounds, dropping off drinks and snacks to keep up officers’ energy levels and providing often much lacking access to toilets.

The Federation is doing its bit to ensure the experience of those who are deployed to Hampshire is as seamless as possible, and the force has worked hard with us to ensure officer welfare is uppermost in its planning. And, so far and so good. Things are running smoothly; we’ve been present at briefings and have set up at 24-hour hotline (07901 102513 and 02380 478919.) - so if there’s an issue and a supervisor can’t solve it, officers can phone this number and we will be on it as quickly as possible.

This operation has been a prime example of local and national federations coming together with the local forces. Both the Met and Hampshire have been brilliant at keeping us in the loop and shows how important working with one another is in the interest of our members and the brilliant things we can do.

Hopefully the President’s visit will pass without incident and the focus remain on the event itself not on the officers policing it.