As 2019 dawned, the Police Federation of England and Wales (PFEW) was looking forward to celebrating 100 years since it was formed by an Act of Parliament.

National Chair, John Apter, called on federation representatives to “recognise the brilliant work” locally and nationally that makes members’ lives that little bit better, “much of which goes on unseen every day”. The year would be about “recognising how far we have come – learning from the difficulties we have had and moving forward,” he added. 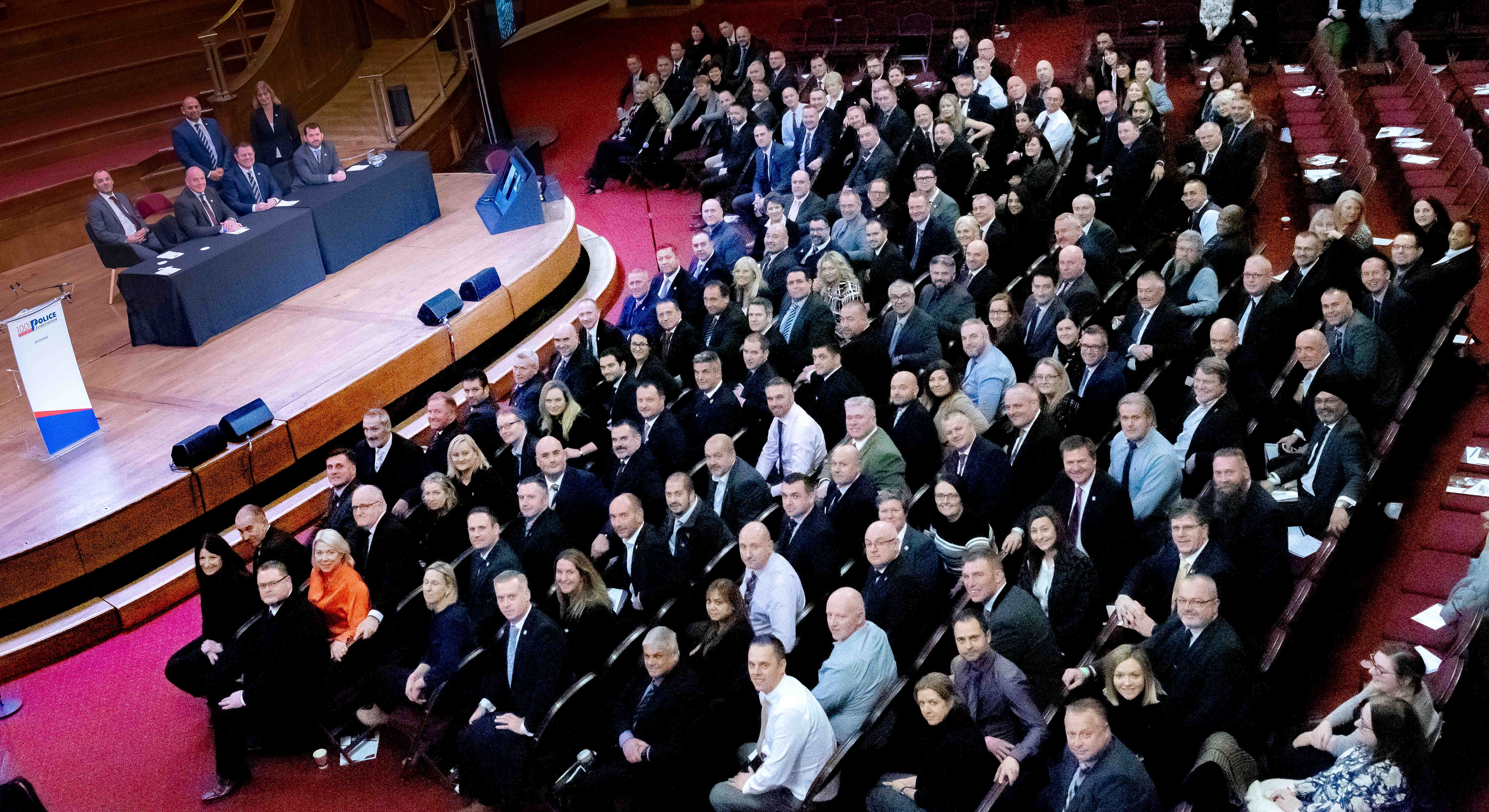 PFEW’s Roads Policing Conference took place in Hinckley in late January amid renewed calls for a change of law to protect police drivers from prosecution, simply for doing their job.

February – Commissioner Cressida Dick agreed that frontline Met officers could have spit and bite guards and a memorial was unveiled at Parliament for the late PC Keith Palmer GM. The Federation submitted evidence to the Police Remuneration Review Body (PRRB) for a 5% pay uplift in 2019 and the same amount in subsequent years. National Secretary, Alex Duncan, said: “The level of police pay has now eroded to a point where police officers are worse off than they should be".

March – National Chair John Apter urged MPs to “set aside party politics” and give police the resources they need to halt the country’s knife crime epidemic. PFEW was subjected to two devastating cyber-attacks, prompting a decision to cancel our Annual Conference. 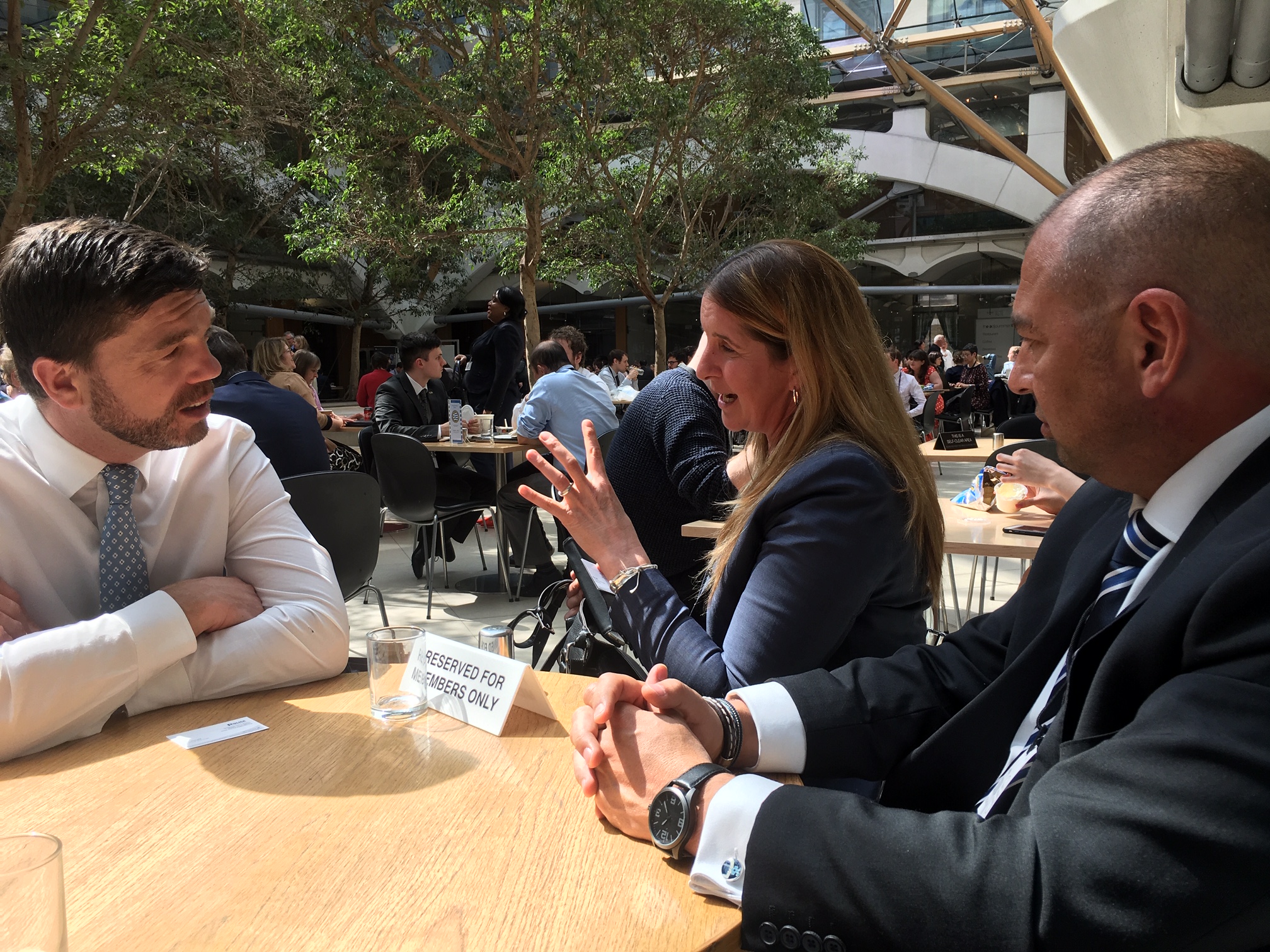 April – PFEW's Menopause Survey revealed the difficulties officers were having with the symptoms and that 44% of those surveyed had considered quitting their jobs. PFEW worked with Channel 5 on its four-part series Police Code Zero: Officer Under Attack highlighting the dangers to frontline police.

May – the Government promised to correct an historic unfairness which leaves police drivers vulnerable to prosecution whenever they drive the legal standard. A study showed one in five police officers were suffering from Post-Traumatic Stress Disorder (PTSD).

June – The Federation secured improved pay and conditions for officers involved in policing the visit of US President Donald Trump. We also supported the first national conference around disability in policing and National Chair John Apter welcomed the resignation of Prime Minister Theresa May. 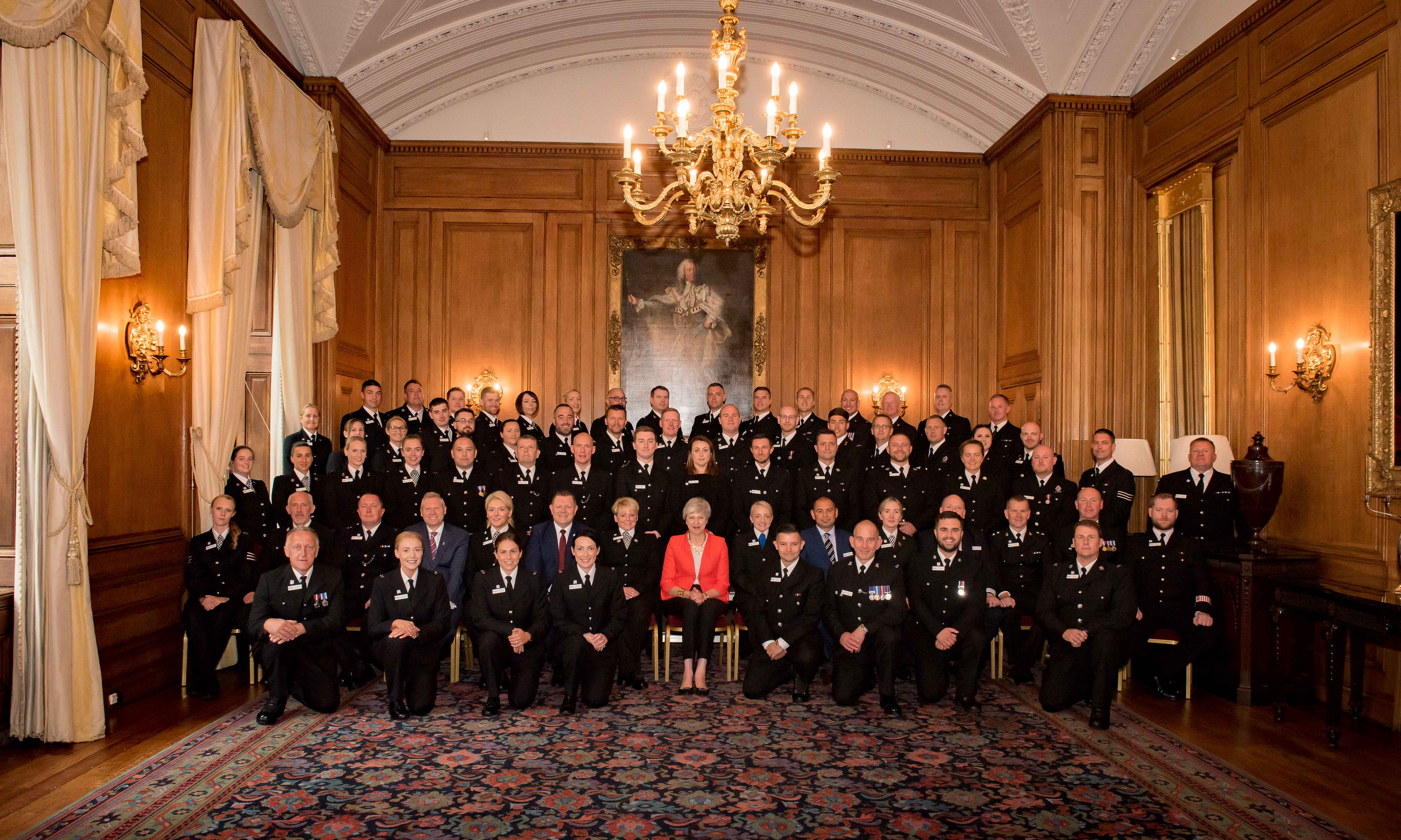 July – Policing Minister Nick Hurd chose Federation House as the venue to launch the Home Office’s Front Line Review, calling it “a genuine opportunity to drive the kind of change we want”. Home Secretary Sajid Javid lent his support to the creation of a Police Covenant and the 24th annual Police Bravery Awards took place in London. Warwickshire officer PC Andrew Dear was the overall winner.

The Home Office agreed to “accept in full” the recommendations of the Police Remuneration Review Body (PRRB) of a 2.5% pay award for police officers. The Federation called the award a “small step in the right direction” but demanded the Government do more to make up for years of real-terms pay cuts. Proposals to allow special constables to become members of the Police Federation of England and Wales (PFEW) were welcomed. 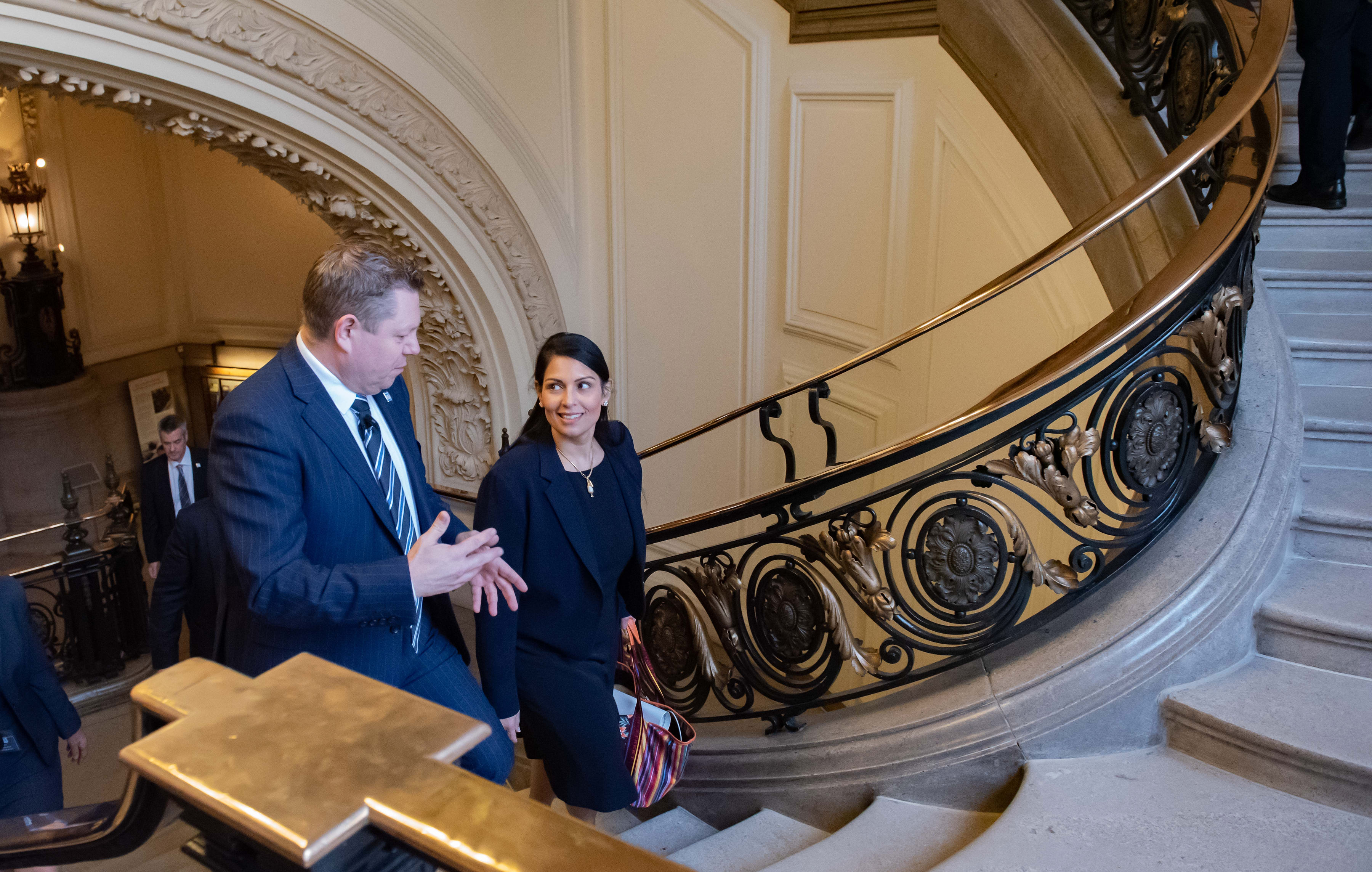 August – The nation was in shock following the tragic death of Thames Valley’s PC Andrew Harper, a newlywed who was responding to reports of a burglary. New Home Secretary, Priti Patel, pledged to provide officers with the powers and tools they need to keep themselves and the public safe. PFEW called on chief constables to follow the example of CC Nick Adderley in Northamptonshire to increase the availability of Taser. PFEW’s Karen Stephens linked a fall in rape charges and prosecutions to detectives struggling to deal with overwhelming workloads.

September – The Chancellor announced funding to support the first wave of a 20,000 police officer uplift, while Home Secretary Priti Patel acknowledged that policing had been underfunded and under-supported. ACC Nev Kemp delivered the keynote address at PFEW’s Custody Seminar in Hinckley, saying new and upgraded custody suites may be required to support the government’s police officer uplift. Inspector Katie Andrews of Derbyshire Constabulary was presented with the award for Outstanding Contribution to Police Custody. 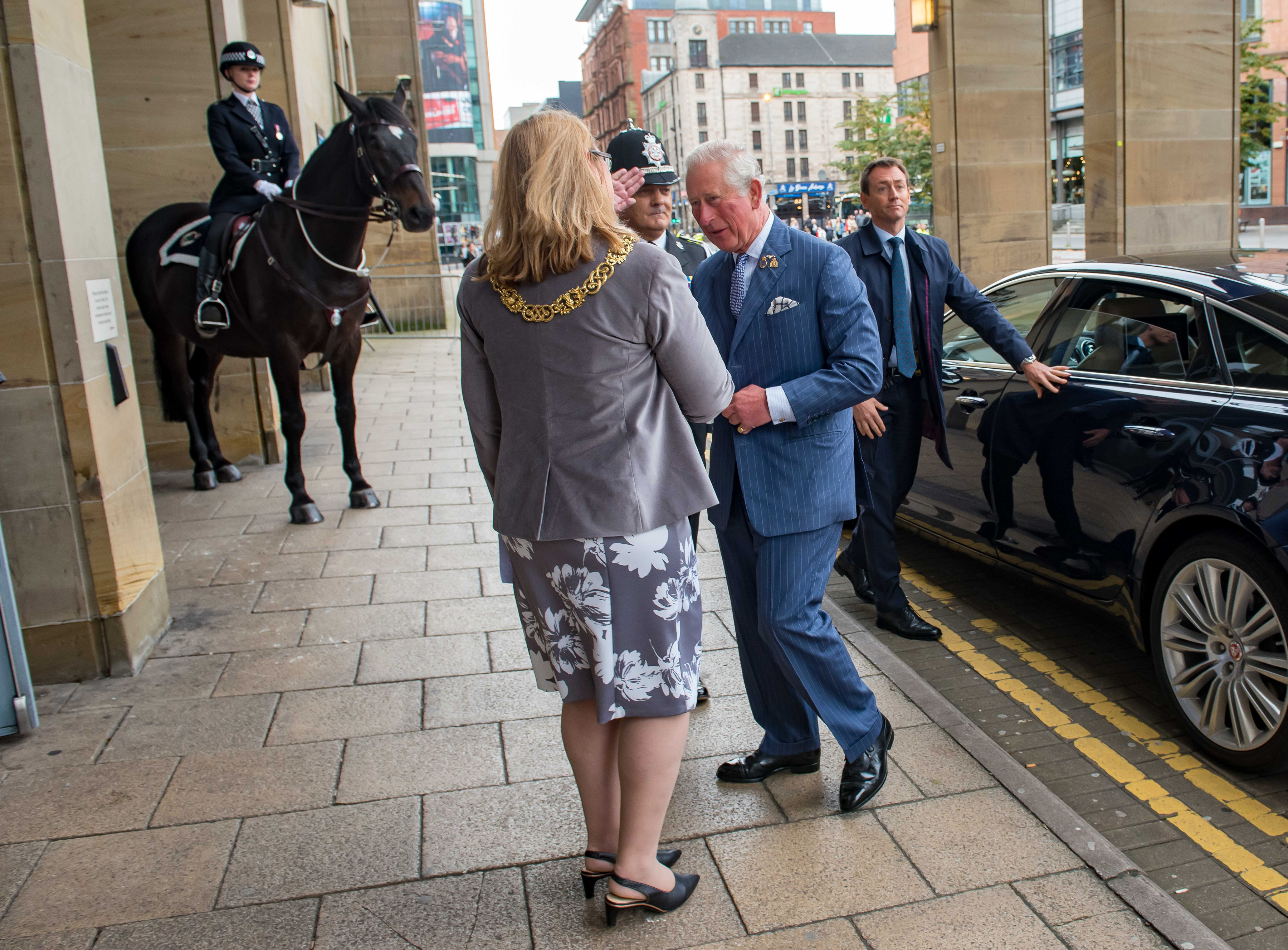 PFEW National Board members Hayley Aley and Belinda Goodwin presented on wellbeing and the menopause at the Emergency Services Show in Birmingham, and the police family gathered in Glasgow alongside HRH The Prince of Wales for this year’s National Police Memorial Day service.

October – The Federation said members could have more confidence that the pay rise process would be fairer in future following the outcome of a Judicial Review. Outstanding detectives received awards at the annual Police Federation National Detectives’ Forum (PFNDF) in Birmingham, including two teams which successfully investigated child exploitation and sexual abuse.

Chief Constable Simon Chesterman, the National Firearms Lead, praised UK armed police officers as the “best trained, most restrained and most professional” in the world, in his address to the PFEW Post Incident Procedures seminar. The event in Warwickshire also heard a powerful account of an officer subjected to '27 months of hell' when he was investigated over injuries to a fleeing suspect. 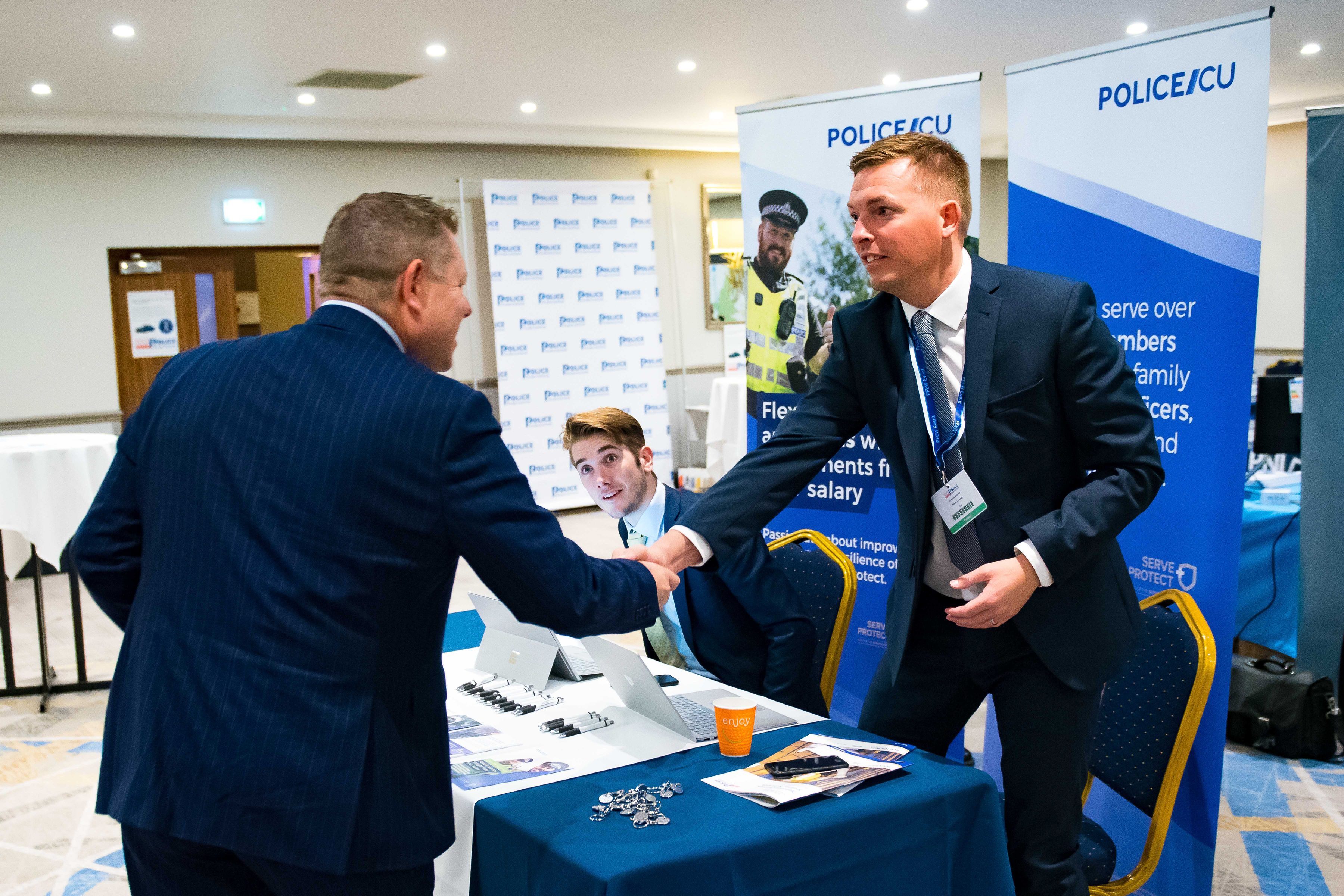 PFEW Chair John Apter (left) greets an exhibitor at the Custody Seminar, one of several events put on by PFEW this year

November – Bonfire Night attacks on police officers and other emergency workers were condemned by PFEW’s National Chair. John Apter also addressed the Association of Muslim Police (AMP) and called for closer working between the organisations. As research by PFEW revealed that more than half of police officers worry about money on an almost daily basis, the Federation announced a doubling of the funding it gives to the Welfare Support Programme.

History was made on 21 November when the Federation gathered at Central Hall in Westminster almost a century to the day after the first ever PFEW meeting was held there. Tributes were led by the Home Secretary and Lancashire custody sergeant Hana Alayli-Moore received the National Women in Policing Award.

December – PFEW launched a virtual advent calendar with offers designed to help improve police officer wellbeing in the run-up to Christmas. National Chair John Apter responded to the terror attack at London Bridge which claimed the lives of civilians Saskia Jones and Jack Merritt, and Vice-Chair Ché Donald hailed new guidance from the College of Policing which could result in officers with Colour Vision Deficiency (CVD) accessing firearms and Taser. John Apter used his Christmas message to call on the government to make good on its promises to policing, and to thank members ‘for all you do’.

See all of our news stories from 2019