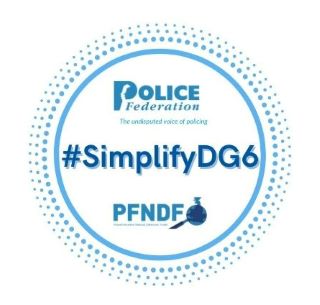 The Police Federation of England and Wales (PFEW) has launched a targeted campaign to appeal the Government to make amendments to the data protection laws to simplify the redaction obligations placed on police officers under the new evidence disclosure guidance. The campaign, #SimplifyDG6, also calls on the National Police Chiefs’ Council, the College of Policing and the Crown Prosecution Service (CPS) to jointly work with PFEW in ensuring all our members receive nationally agreed face-to-face training on disclosure procedures.

The campaign was launched after a thorough study of the Attorney General’s Review of Disclosure published on 26 May. PFEW believe the review is disappointing and inadequate in respect of simplifying redaction obligations and fails to make any recommendation that will immediately mitigate the huge impact of disclosure on its members.

PFEW acknowledges that the review aptly identifies some of the shortcomings in the CPS Disclosure Guidance leading to significant pressure on police officers regarding the submission of case files to the CPS for charging decisions. However, it does not offer any immediate remedy. It is also problematic that the review merely suggests that a single source of authoritative guidance for the redaction of case material passed to the CPS is “preferable” but does not demand it despite identifying an acute need for one.

Ben Hudson, Chair of the Police Federation National Detectives’ Forum and National Lead on the Impact of Revised CPS Guidance said: “We appreciate that the Attorney General's Office Annual Review of Disclosure has been sensitive towards the plight of police officers with regards to the redaction of case material, which is singularly responsible for overburdening case workloads. Though the review identifies several ambiguities, including adherence to data protection laws, it does not provide any major action points to redress the shortcomings.

“Instead, it seeks to blame our members’ lack of understanding about the vital role disclosure of case material plays in the criminal justice system. It puts the onus on police forces to make every effort to alter the current culture around disclosure procedures.

“The review accepts that “strictly speaking” redaction and data protection are not direct aspects of CPS Disclosure Guidance. However, in absence of a uniform code and lack of specific guidance, police officers, investigative officers, detectives, and specialist disclosure experts are compelled to devote significant time and resources to the redaction of case material to ensure that data protection laws are adhered to, and personal information is not revealed, even between collaborating agencies.”

Commenting on one of the review’s key findings that “the police do not always apply their discretion when offering information for disclosure under the rebuttable presumption” leading to needless redaction obligations, Mr Hudson said: “The remit of Rebuttable Presumption is too wide and impractical for police officers to comply with and to stand the test of disclosure they inadvertently end up redacting enormous volume of case material. This ultimately creates a burden on the CPS and justice delivery system as well as the officers themselves struggling under an impossible workload.”