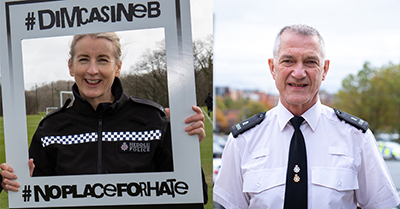 Rank and file officers have been honoured alongside members of the Special Constabulary and police staff in the 2022 Queen’s New Year Honours list for their outstanding contribution to the service.

Recipients include PC Anne Overton from South Wales Police who is to receive a Queen’s Police Medal.

Her passion and dedication has brought about positive changes for victims of hate crime, the transgender community and other complex communities.

Becoming a Hate Crime Officer for the Swansea and Neath Port Talbot area in 2018, Anne has forged links with a range of hard-to-reach groups including the gypsy and traveller community.

Her engaging and supportive nature led one transgender person who was at breaking point to reach out to her for help. The individual has gone on to inform the wider LGBTQ community of the support she has been given increasing trust and confidence in a community that has previously viewed the police with suspicion.

As a direct result of her work, there has been an 83 per cent increase in the reporting of transphobic hate crime in the Swansea and Neath Port Talbot division between 2019 and 2020.

She also created the “No Place for Hate” initiative at Swansea City Football Club to tackle racist behaviour at football games.

“I am delighted – and a little bit embarrassed! I have loved being a police officer and being able to do the job that I have in the community I grew up in,” commented PC Overton. “I feel proud to be part of a team that’s improving awareness and reporting of hate crime in the community.”

Met Detective Inspector Driss Hayoukane has also been honoured with a QPM for spending his 30-year policing career investigating the most dangerous regional, national and international criminals who have committed serious organised crime, while also acting as a role model for so many others, mentoring fellow BAME officers both prior to and on joining the detective ranks.

His dedication to his job has saved lives and delivered justice to victims and communities, whilst working in a high-risk area of policing.

In 2019, DI Hayoukane took on the significant task of dismantling one of the most violent organised crime networks in the UK – the Tottenham Turks. It is recognised that this operation alone has been responsible for a 40 per cent reduction in gun and knife crime between OCN’s in the Haringey area.

As a Tactical Firearms Commander, Driss often responds from home, to thwart and avert life at risk offences occurring. He puts personal and family life on hold to ensure the sustained safety of the public from the most dangerous of criminals.

Reacting to the news, he commented: “This is not just my honour, it’s a reflection on the great work of all the talented people I get to work with.”

In his time as a Special, Don has helped keep the public safe at a series of historic events including a visit from the Pope, the abandoned Grand National in 1997, and even a Michael Jackson Concert at Aintree.

“It was an absolute honour and privilege to be nominated for this prestigious award,” he said. “To be given this accolade for something that I love, get so much out of and I am passionate about is an unbelievable experience.”

Welcoming the announcement, Ché Donald, National Vice Chair of the Police Federation of England, said: “Police officers serve the public and don’t seek praise or thanks, so to be recognised with an honour from Her Majesty the Queen is an enormous privilege. I therefore want to congratulate those individuals who received an award for their extraordinary achievements.

“Colleagues have worked selflessly throughout 2021 under enormous pressure, and this deserved recognition for police officers and staff will rightly be celebrated throughout the service.”