“Those who assault our colleagues disgust me” 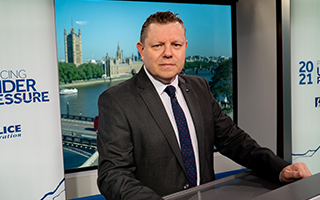 John Apter raised the issues of vaccination and assaults against officers at the forefront of his keynote speech to the Police Federation of England and Wales (PFEW) Annual Conference this morning, Wednesday 9 June.

The Federation’s National Chair addressed the event, which was held virtually for the first time in its 102-year history, from a studio in Westminster, while sharing a platform with the Home Secretary.

He reflected on the extraordinary challenges of policing the pandemic, including enforcing rapidly changing Government guidelines that had been “far from clear”. But it was the attacks on colleagues (up 26 per cent in the last year) that was the most unacceptable, he said.

“I have a message to those who goaded my colleagues, who attacked police officers for simply doing their job, who weaponised Covid by coughing and spitting at my colleagues often saying they had Covid and they hope the officer caught it and died...

“To those individuals, you completely disgust me. And I know that you disgust every decent, law-abiding person,” said Mr Apter.

The PFEW National Chair praised the “silent majority” who appreciate the sacrifices police officers have made.

He reminded the Home Secretary of her assurances that officers would be prioritised for the Covid vaccine, adding those “warm words became lame actions”. As a result, policing feels “deeply betrayed” by Government, said Mr Apter.

He continued: “This was never about police officers elbowing their way to the front of the vaccination queue. Just this week, we have thousands of colleagues from all over the country coming together to police the G7 Summit in Cornwall – police officers from those communities where the Delta variant of the virus is thriving. We have young police officers who, by age alone, will not have been vaccinated. How can that be right?”

Mr Apter praised Government for bringing forward legislation that introduces a police Covenant and a doubling of the maximum sentence for assaults on emergency workers. However, he warned the changes will mean “absolutely nothing without sentencing guidance that is fit for purpose”.

Priti Patel must be “intrusive” about the welfare and safety of police officers, said Mr Apter. This means continuing to question what safety equipment and training they have.

The Chair also criticised social media companies who allow their platforms to be used by individuals who film attacks on police officers for entertainment or post selective and inflammatory clips without context.

On the issue of police officer pay, Mr Apter said: “In real terms, officers have already had to suffer an 18 per cent cut during the last decade.” He called for a pay review body that policing “can have faith in” and a binding agreement from the Government that it will implement any recommendations in full.