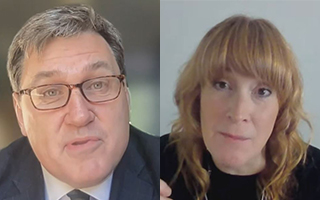 Minister for Crime and Policing Kit Malthouse and Shadow MP Sarah Jones paid tribute to the work of police drivers during their Ministerial Addresses to online attendees at the Police Federation of England and Wales’ Virtual Roads Policing Conference 2021.

With over 600 specialists from across the country in attendance at the prestigious event – themed ‘Accelerating Change’ - The Rt Hon Mr Malthouse MP praised roads officers for their work during the pandemic.

The Minister of State, who is Conservative MP for North West Hampshire, said: “I’m very pleased to be here to talk about this particularly important part of the policing mission. This for me is a critical part of the architecture on the mission I have been set by the Prime Minister of driving crime down.

“I use the road network extensively and am very conscious of the risks and particular experiences to which roads policing officers are exposed. Thank you very much indeed for the work that you all do.

“Not least over the past 18 months or so where during the pandemic the roads obviously became a particular port of importance and often, sadly, friction. Your skill and expertise were put to really good use and often to good test. You, alongside the rest of UK policing, came up smelling of roses.

“While it had its’ tensions and its’ moments, British policing, and roads policing in particular came out of it extremely well and in better shape than it went in terms of the affections of the public. It was a fantastic job and I thank you all.”

Sarah Jones MP, Labour’s Shadow Minister for Policing and the Fire Service, also paid tribute to the fantastic work done on the roads in an unparalleled period for roads policing.

She added: “I want to thank all roads police officers for the work that you do. It’s an incredibly important job and the cuts to your numbers has had a significant impact. We will be holding the government’s feet to the fire over this.

“I am ashamed you have been offered a pay freeze – you need a pay rise. I also know the process of not getting vaccines was really painful. I am sorry that was not done for you.”

Both politicians also discussed the Police, Crime, Sentencing and Courts Bill and the proposed changes to legislation which would create a new standard for roads officers to be judged in a court setting.

Mr Malthouse said: “I welcome this new delineation between the skill and standard of driving required of a police officer in a court as against that of an ordinary member of the public. I hope and believe that the new test, which we’ve discussed with the Federation – who have been critical in their lobbying to get this through – that will provide you with a greater sense of security.”

Sarah Jones MP, who supported a pay rise for police officers, disagreed that the Government was doing enough with the Bill.