Detective Constable Steven Bailey of City of London Police has been announced as the winner of the Inspiration in Policing award at the National Police Bravery awards.

An officer with over 30 years’ service, Steven was struck down with Covid and was hospitalised for over two months, put on a ventilator and placed into a coma. After beating very steep odds to make it out of hospital, Steven continued to suffer from a plethora of Covid related medical conditions, including losing almost a third of his muscle mass. 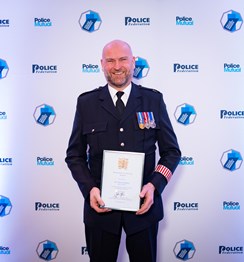 Steven also suffers with PTSD as a result of his experiences and the nature of the treatment he received, which often manifests itself in the form of a recurring nightmare of drowning on a beach which is linked to the subconscious feeling of his lungs being filled with fluid whilst in the coma.

Despite the horrors that Steven has faced over the last few years, he has gone on to pass his Sergeants Exam, demonstrating his resilience and determination to get his life back to normality and continue his passion for policing.

Steven is keen to help other officers and staff to learn from his experience of suffering with Covid, and to help spread the message of how to look after yourself and your loved ones by following Covid guidance. He appeared in a video aimed at the police family about this and after an emotional day of filming, the result was a powerful piece to camera where Steven very bravely laid bare his feelings, experiences and fears in a very open and frank way.

At the time of filming, Steven was still undergoing treatments and struggling with this own wellbeing but was committed to helping make the wider police family safer and to understand the risks that Covid poses to everyone. The video went on to engage with close to a quarter of a million people. Steven said “if it makes a difference to one person not going through what I did, I have succeeded.”