PFEW’s national Vice Chair has told the National Black Police Association Conference cultural change is required within policing to ensure everyone is ‘respected, treated equally, and given equal opportunities.’ 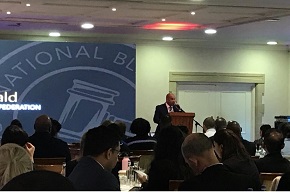 Ché Donald was addressing delegates today at the three-day event in Bedfordshire alongside other keynote speakers including Home Secretary Priti Patel and Ravi Chand CBE QPM, Programme Director Places for Growth and Beyond Whitehall at the Cabinet Office

The conference, sponsored by Bedfordshire Police Federation, was attended by senior representatives from 43 police forces and senior government figures.

Focussing on the difficulties women face in public and policing, Mr Donald said: “Cultural change is still required within policing, where we create an environment where everyone in policing is respected, treated equally and given equal opportunities.

“Currently, women still have more difficulty with employment rights, flexible working, maternity leave and pay and promotion. All in an environment which remains significantly male dominated - where the best route up, remains by design, best suited for a white heterosexual male.”

Mr Donald addressed the police pay mechanism and reiterated PFEW’s campaign for ‘a fair and independent pay mechanism which places a binding decision on government - not the loaded system we currently have.’

He also highlighted the positive increase in the number of individuals from ethnic minorities who have recently been elected as PFEW reps, with the percentage rising by 7.4 per cent to 10.8 per cent.

But he issued a warning that the negativity which currently exists around policing could impact on recruitment and retention.

He said: “The 20,000 Uplift programme is a step in the right direction, but there is still more to do to attract people from all backgrounds – and keep them in the service. Just getting people through the door to satisfy a target is not good enough.

“Early figures show retention difficulties in relation to those from diverse backgrounds. A fundamental flaw in driving forward recruitment and retention - which is often overlooked - is providing employment where the pay and conditions of service are attractive and competitive, which they are currently not.”