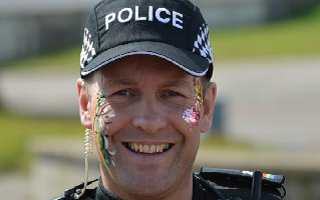 For those of you who don’t know me, I’m Ian and I am a police officer with 27 years’ service, based in Lancashire. For the last 17 years or more my passion has been about equality and inclusion and making sure that everyone can just be themselves. So how have I got so involved in this and why am I now here speaking to you in my new role?

I joined Lancashire Constabulary back in 1993 and at that time I was a young, fresh-faced 21-year-old with my whole life ahead of me. I wanted to join the police and make a difference, but don’t we all? I was ‘single and ready to mingle’ and the police was probably a good place to start as everyone loves a man in uniform, don’t they? Joining the police was always my dream; my dad was in the police and I wanted to follow in his footsteps, so this was a great opportunity for me.

But like many in my position, and I am sure there are many of you out there who can resonate with me, I took a path, not one I regret but probably one that I felt I had to take to fit in, especially in the 90s when being different wasn’t really accepted. I met a policewoman in my division, and we struck it off straight away. Very soon after we planned to marry and found out we were expecting a child.  We got married and on Christmas Day 1999 our son Oliver was born. He was destined to be special from that day forward and was probably the best present we could ever have. Very quickly our son was diagnosed with a rare life-shortening condition and we were told he had 18 months to live at most.

This certainly put a different perspective on things and over the coming years life became more difficult and gradually we drifted apart but remained good friends for the sake of Oliver. It was about this time that I decided to be true to myself. I needed to do this for my own mental health but also to ensure Oliver could have the best quality of life. I decided to ‘come out’.

This wasn’t an easy thing to do as it still wasn’t that accepted to be gay, especially in the police. It was easier for women (that’s a fact) and I knew several gay women, but I knew only one other gay man in the police.

I went to him for support and he was able to tell me about a secret group of gay police officers that met behind closed doors. But how could that be right? There was me making this huge decision but with no idea how it would impact on me or my family and all there was to support me was a secret group. It was a difficult time for me but I just knew that I didn’t want anyone else to be feel the way I was, so I took a decision to overcome my struggle and chose to focus on making a difference and ensuring no one else ended up like me with only a secret group for solace.

I decided to be proud and come out to everyone - my aim being to take that secret group into the 21st century and be visible, open and accepted. I became Chair of our LGB&T Staff Support Network and took myself with Lancashire Constabulary on a journey of acceptance. By being open it encouraged others to come and join the group and together we raised the profile of our LGB&T staff. 15 years later, a new partner Andy, a number of Pride events attended, rainbow cars, rainbow epaulettes and Stonewall recognition has shown we can in fact be ourselves - and its great! Anyone who doesn’t agree, well let’s just say you can’t change everyone overnight.

After that whirlwind of a journey I needed something new to do. I’ve never needed the Police Federation from a discipline point of view, although they had supported me financially for my disabled son. Through my local LGB&T+ network Chair’s role, I kept seeing LGB&T staff accessing the Police Federation for support, but there was no one locally who I knew identifying as LGB&T so the Federation would come to me for advice and support. The natural progression was therefore to become a Fed Rep and continue that support for others.

At the last elections I stood as a candidate and was elected as a workplace rep in Lancashire. I very quickly did all my basic training (I was adamant I couldn’t do this role without the training, so I wanted to get as much done as possible before I started supporting members). Once I had done this and having met with so many other Fed Reps from up and down the country, I decided I wanted to start bringing my passion to the Federation and after attending my first Police Federation Conference in 2018, it just emphasised that even more. Surveying the hall, trying to spot the diversity was a bit like a ‘Where’s Wally’ book. It wasn’t easy. I started speaking to people and managed to get on board with a project Ian Saunders was looking at to develop an LGB&T+ Self-Organised Group (I’ll come back to that as I hate the name). A small group of LGB&T+ Fed Reps were convened and several months later we launched the new Police Federation LGB&T+ Self-Organised Group. I was very privileged to be nominated as its first Chair.

For those of you out there who believe you can’t make a difference, I have been a Rep for just over two years and already I have manged to get a national role. Yes it’s over and above my day job, so not full-time, but it gives me and the rest of our LGB&T+ Fed Reps a place at the table where I can assure you we are fully supported and will work together to slowly make a difference and change the face of our Federation so that it is inclusive and represents our members.

This is a journey I am passionate about and I don’t want to do it alone, so please, if you are LGB&T+ and looking to make a difference, or if you just want to be an ally, then join us and ‘Be Proud’. We are known as a Self-organised Group but for me that sounds like we’ve just set ourselves up with no backing, but we are a group that has the full support of the Police Federation, including National Chair John Apter who is keen to work with us to influence and encourage inclusion.

Finally, for anyone who is wanting to know, Oliver will be 21 this Christmas Day, so he has proved the doctors wrong. If you follow me on Twitter - @PCIanAshton - you will know his smile lights up any room. He is still with us because I was true and honest to myself by being me which meant I could be the dad he needed. His mum and I are great friends and we take every day as it comes but above all we are all happy, we are a family - just like the Police Federation. 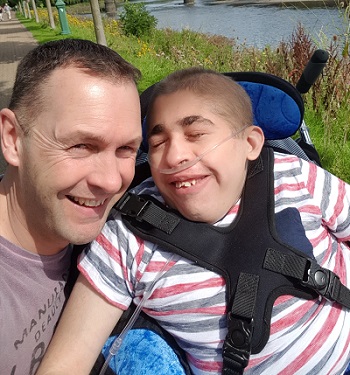 Ian and his son Oliver