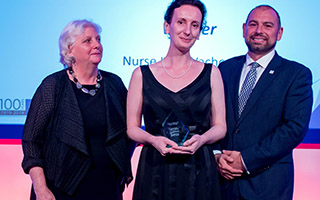 Nurse Ulla Wachowska, who works for the Metropolitan Police at Heathrow police station, was presented with the accolade at this evening’s National Custody Seminar and Awards 2019, organised by the Police Federation of England and Wales (PFEW) and National Police Chiefs’ Council (NPCC).

The judging panel were impressed by all of this year’s nominees and the incredible work they do, but overall felt Ulla’s unwavering commitment to the role was deserving of the top award.

With a wealth of nursing experience and knowledge, Ulla has been recognised for her thoroughness and hard work on every shift, often going above and beyond what is expected of her role.

Earlier this year two officers were attacked by a violent detainee, causing them physical injuries. Knowing there was no health care cover after she left, and to prevent the officers from having to wait in A&E, Ulla voluntarily stayed an hour after her shift had finished to provide medical treatment and body mapping for both officers.

Ulla has also been honoured for her calming demeanour and quick-thinking which in turn has prevented situations from escalating whilst keeping detainees and victims safe.

A prisoner due to be released had nowhere or no one suitable that he could be released to. He began to shake, and Ulla swiftly established he was suffering from heroin withdrawal symptoms.
She stayed with him and personally monitored him, giving colleagues the time to find his family. This meant the detainee was released in a safe condition and the time allowed a vulnerable victim involved in the incident to be safeguarded.

Her colleagues are also grateful for her ability to use her initiative, often completing drug counts which takes vital time and pressure off custody sergeants and will occasionally even assist in language translation for detainees.

PFEW Custody Lead Clive Knight said: “Custody can be a highly-pressurised environment, so seeing the level of confidence that Ulla’s colleagues have in her, knowing detainees will always receive the best care and support under her wing, proves to us she truly deserves this award; and we thank her for her selfless commitment and hard work.”